Witches have existed for millennia, but the concept of a “witch influencer” on Instagram or WitchTok is new. You can find a witch influencer giving you all you need to know in a one-minute video or infographic, whether you’re seeking advice on which crystal will entirely revolutionize your life (hello, moldavite) or a Full Moon ceremony or three to try.

Witch symbols have always been inextricably related to the outcast, alienated, unusual, or misunderstood. Additionally, as witchcraft spread, it evolved into a more diversified, decentralized, and subjective practice.

Since ancient times, the witch has served as a symbol of feminine empowerment. The witch poses a challenge to patriarchal myths as the outsider with eerie power. The prevalence of the witch in literature, film, and popular culture reveals the depth of Western civilization’s compulsion.

Activists battling for their gender, politics, sexuality, or environmental health use the witch as a declaration of strength and empowerment.

Today, the symbol is gaining fresh resonance, both spiritually (paganism has expanded considerably in the US in recent years) and metaphorically. 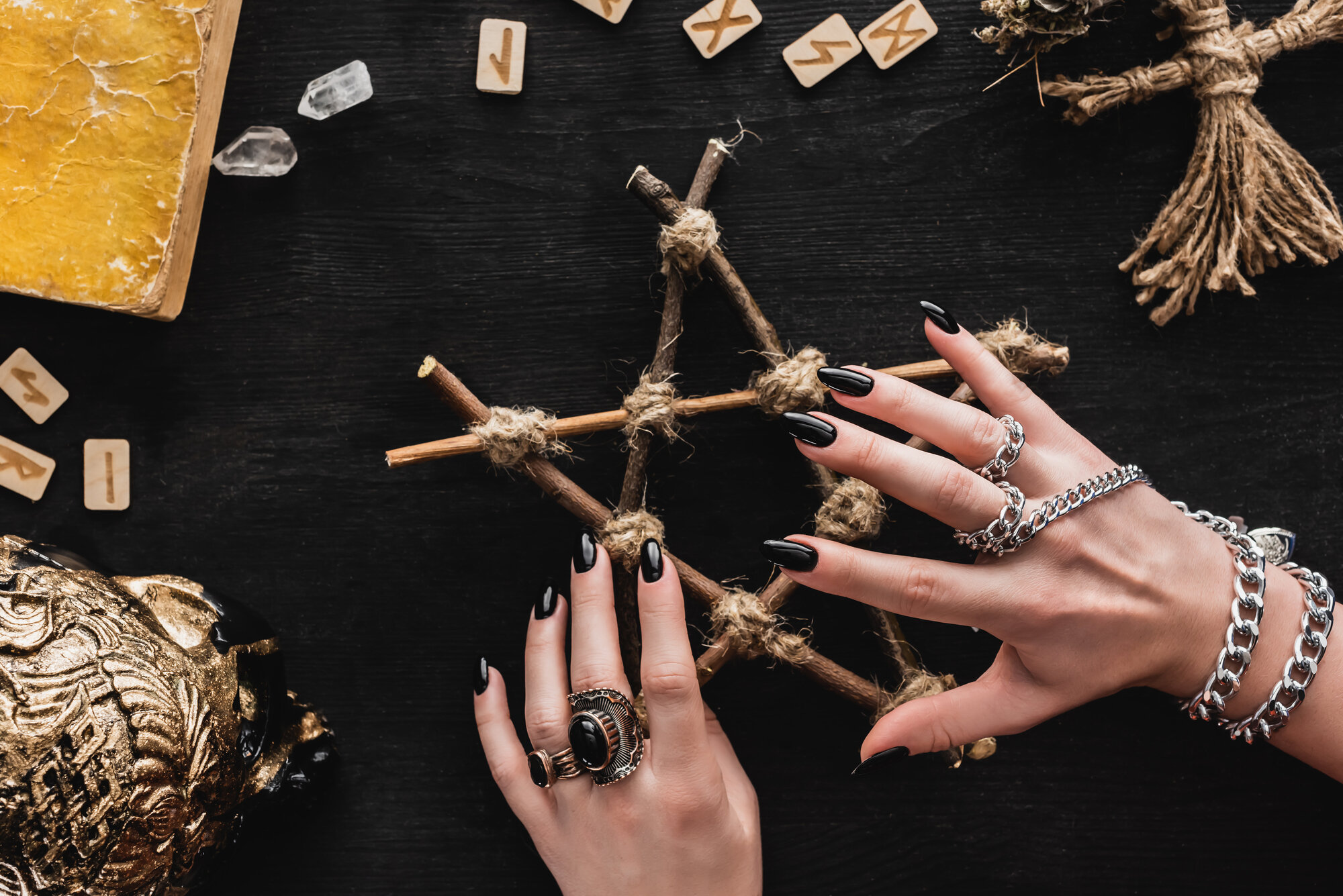 Some Witch Symbols That Everyone Should Be Aware Of

Wicca is the more popular name for pagan witchcraft. Because there are several “denominations” of Wicca or traditions, the significance and meaning of the symbols used will change depending on the tradition the user is adhering to. The moon goddess and the horned god are the two main deities in most pagan faiths that use witch symbols.

Every sign a witch or pagan uses is said to have been charged throughout each ceremony, which is why these witchcraft symbols are so potent in ritual magic to advance spiritual practices and call forth healing, love, protection, and assistance in spells that interact with deities.

This means that whenever you use a symbol, you are drawing on the energy that was utilized by every witch or pagan before you and helping to charge the sign itself so that it becomes even more potent than it was before.

Each time witches employ these symbols in spells, rituals, meditations, and manifestations, they create a binding energy connection among all witches.

The sign for Earth is utilized in rituals and divination to invoke grounding, fertility, and matriarchal Goddesses, and it is associated with all things tangible including money, property, and physical belongings.

This symbol may be utilized to improve all aspects relating to bodily manifestations, attract abundance, support fertility, and more.

The astrological Earth signs, such as Capricorn, are associated with people who are highly steadfast and grounded.

One of the four traditional alchemical elements, Air is represented by a triangle with a line running through it. When Wicca practitioner wants to highlight communication or knowledge, they employ air in their ceremonies. Additionally, it might represent the east. It also stands for knowledge, communication, the east, the soul, and the air.

The Tarot card The Tower is portrayed by the devastation and turmoil that new beginnings are based upon. The fire symbol is utilized in rituals to bring cleansing, protection, and healing. It also symbolizes new beginnings, male energy, and The Tower. The Fire Emblem is also connected to astrological Fire signs like Leo, which are known for their passionate loyalty to friends but will burn you if you burn them.

The Triple Moon sign portrays the divine feminine witch in all of her life stages, symbolized by Maiden, Mother, and Crone as indicated by the phases of the moon, and governed by the realms of Earth, the heavens, and the underworld.

Therefore, the Triple Moon Goddess sign may be utilized to conjure these Goddess energies in deity magic since it is a neo-pagan symbol that represents all of the triple Goddesses throughout history.

The solar cross is a circle with four lines slicing it, with a smaller circle in the middle. It is sometimes referred to as a sun cross or Wotan’s cross (or Odin’s Cross from Norse Mythology). It can stand in for the sun, the planet earth, the four distinct seasons, or the four basic elements.

The solar cross also comes in a swastika variant.

If different types of crosses and their meanings are of interest, be sure to review our detailed essay.

Which are the Witch Protection Symbols?

Symbols have a variety of functions, including healing, protection, warding off evil, bringing good fortune, and showing love in life. There is a multitude of distinct witch protection symbols within each of these ideologies. One of the main symbols is the Pentacle.

A potent sign of protection, the pentacle is frequently connected to Wicca and witchcraft. The pentacle, which has five points, is a combination of the pentagram and the circle.

The pentacle stands for the completeness of both the natural world and the person. The top point of the star signifies either the self or the divine spirit, while the pentagram’s five points stand for the four elements. The pentacle is said to have its roots in Greece, where the earth goddess Ceres was connected to it.

Most people identify witchcraft or satanism with pentagrams, which are five-pointed stars with circles around them. The pentagram is a protective, self- or spirit-representing symbol, far from being an evil one.

Earth, air, fire, water, and spirit are the five fundamental elements that are represented by the pentagram’s five points. It serves as a form of ceremonial protection.

For a deep dive into the differences of the Pentagram and Pentacle, see our detailed Pentacle vs Pentagram article.

The all-seeing eye represents the goddess’s supreme defense. It is an eye that is visible through sunlight. Because it represents the protection and involvement of god/goddess, this sign is also known as the “eye of providence.”

The Eye of Ra and Ere of Horus from Ancient Egyptian Mythology are most often associated with this symbol. For a detailed comparison of the two, see our comparative essay on the Eye of Horus vs Eye of Ra.

A faery star is what the septogram is called. It has seven points, which is a significant magic number.

Seven chakras, seven elements, seven days of the week, and seven days in paradise are represented by this number. For protection and harmony, rituals are used.

This concludes today’s article on many witch symbols and everyday witchcraft protection symbols.

You can read the complete essay on Pagan Symbols and Their Meaning here if you’re interested in learning more (or click on the diagram below). We hope that this provides you with the range of witchcraft symbols you were looking for!

Let your goals come true, your energies are free of negativity, and joy fills your existence. Thanks for reading with us!