A person who practices Wicca and takes part in its rituals is referred to as a “Wiccan.” Contrary to several other religions, there is no official conversion procedure for Wiccans. Wiccan symbols can simply decide to begin practicing, but they frequently carry out or take part in a dedication rite either by themselves or with other Wiccans to demonstrate their dedication to the faith.

The Wicca religion, one of the world’s most enigmatic, has long been associated with magic and nature worship. The majority of their religious emblems are adaptations of old paganism that reflect modern ideas.

In today’s article we provide an examination of the most significant Wicca symbols.

Contents show
1. Wicca: What is it?
2. Wiccan Symbols and Signs
2.1. The Pentacle In Wicca
2.2. Moon Signs Used As A Wicca Symbol
2.3. Is The Lunar Crescent Moon A Wiccan Symbol?
2.4. God with Horns
2.5. The Athame Is A Powerful Wicca Ceremonial Sign
2.6. What Does The Witch’s Charm (Witch’s Knot or Magic Knot) Represent?
2.7. The Witches Cauldron
3. Summary
4. Are There Other Wiccan Symbols You Would Like Us To Write About?
4.1. Full Visual Wiccan Mystical Symbols List

Wicca: What is it?

The word “Wicca” derives from the prehistoric word “wicce,” which means “to shape or bend,” and refers to witchcraft. Wicca is a broad category of nature-based paganism that commonly worships the Horned God and the Earth or Moon Goddess. It also incorporates ceremonial magic and the worship of both male and female deities. The solstices, equinoxes, moon phases, and elements are the focus of the rituals of this religion.

Traditions from many cults and faiths in medieval Europe have an impact on Wicca. Many point to Margaret Murray’s publications, particularly her 1921 book The Witch-Cult in Western Europe, as evidence for the belief that the practice dates back thousands of years. The Book of Shadows, penned by Gardner, is a compendium of Wiccan-important spells and rites.

Wiccan symbols come in a vast range and are still used today. While some of these may be conclusively linked to ancient Pagan religious icons, others were probably created more subsequently. The meanings of these Pagan symbols have occasionally been changed rather than preserved to match modern Wiccan practice. Numerous other Neo-Pagan faiths or other religions with no connection to Neo-Paganism also employ Wiccan symbols. But in Wicca, the significance of these symbols is very significant. The religion is made up of many diverse traditions and ideas, hence Wiccans may have varied interpretations of the symbols.

The Pentacle In Wicca

The pentacle is a five-pointed star that stands upright, with the top point signifying the spirit and the remaining four points denoting the four elements. As the spirit pulls the elements into harmony and order, which is the antithesis of chaos, it is a sign of protection in Wicca.

Wiccans utilize the pentagram to unite the elements because they think everything is interconnected. A pentacle is a pentagram that is enclosed within a circle. Veterans’ burial markers today bear the Wiccan pentacle emblem, signifying the faith of the deceased troops.

Wicca places a high symbolic value on the moon. The Moon Goddess and the Horned God are the two main deities that dominate Wicca. Triple Moon, often known as the Triple Goddess, is the most significant moon emblem in Wicca.

It depicts the Moon Goddess in each of her three incarnations, including maiden, mother, and crone. The life cycle of women, who are seen as having a special connection to the moon, is represented by these stages in Wicca. In the triple moon, a full moon is surrounded by two crescent moons, one waxing, and one waning.

Curious? Take a deep dive into our Triple Moon and Triple Goddess articles and fill that curious mind.

Is The Lunar Crescent Moon A Wiccan Symbol?

The Moon is a Goddess in her own right for Wiccans; she is more than simply a symbol. Because of the lunar cycle’s similar regularity to the female menstruation cycle, the moon most likely becomes so intimately connected with the divine feminine.

The waxing moon, which represents fresh beginnings, expansion, and creativity, is shown in the majority of crescent moon emblems.

According to Wiccan female symbolism, a woman goes through three phases in her life: motherhood, maidenhood, and cronehood. The Triple Moon, another well-known Wiccan symbol, shows all three stages.

The Lunar Crescent Moon is, par excellence, the symbol of Great Mother, the lunar Queen of Heaven and is the attribute of all moon goddesses. It is the passive, feminine principle and is both the Mother and the Celestial Virgin.

The Horned God, who is the Moon Goddess’ masculine polar opposite, is Wicca’s second most important god. He embodies the master, father, and sage phases of the male life cycle, which correspond to the maiden, mother, and crone phases of the female life cycle. The full moon with a crescent moon on top that resembles a pair of horns is the most typical representation of the Horned God.

The Wiccan athame is a ceremonial dagger that normally has a blunt steel blade and a wooden grip that is typically black, however different covens may choose specific colors. 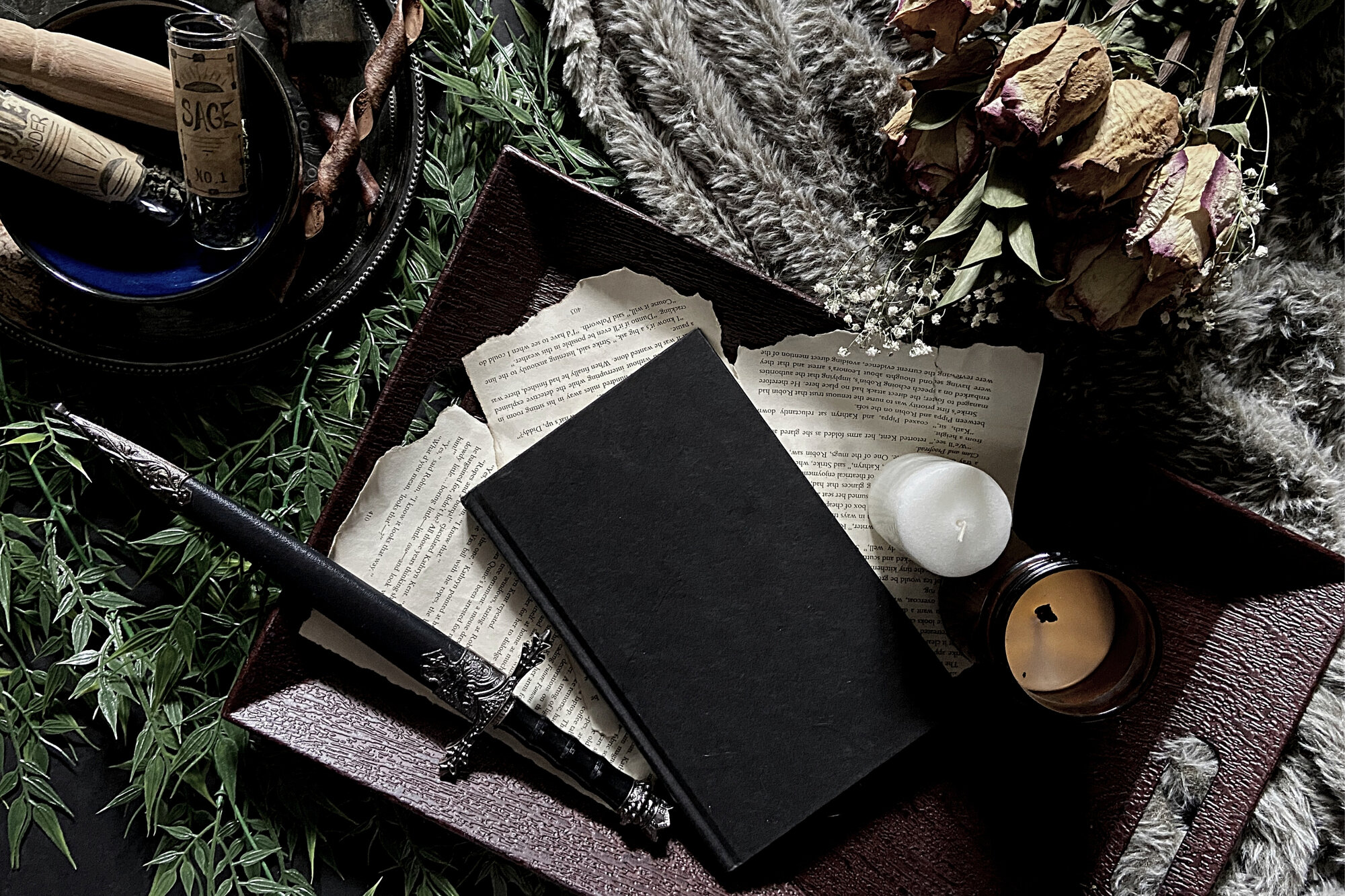 Along with the pentagram, chalice, and wand, it is one of the four elemental instruments employed in Wicca. Usually, numerous symbols connected to spirits or gods are painted or etched on the handle. It is said to stand for the capacity to influence change and make decisions.

The name “Athame” stems from the “Double-Horned Ones”, a Moorish-Arab-Andalusian cult where their blacksmiths crafted the dagger.

The Athame was often used in outdoor ceremonies where a protective Pentacle was drawn on the sand by the witches using the dagger (or a sword).

What Does The Witch’s Charm (Witch’s Knot or Magic Knot) Represent?

Another widely used symbol in Wicca is the witch’s knot, and as is frequently the case with the most widely used symbols, its interpretation has greatly changed from its original intent. It is also known as the Magic Knot in some circles.

It is advised that a Witch’s Knot be made in a single, uninterrupted procedure without stops (a unicursal). This increases the effectiveness of the magic’s purpose for existing as well as its overall potency as a protective symbol, love charm or “binding”. As a protective symbol it functions to shield against malevolent witchcraft

The Witch’s Knot was frequently engraved over stable and dwelling doors. The number ‘three’ is more intimately linked to the divine feminine (as we see with the Triquetra), whilst four is more directly allied with the male energy. The four pieces are sometimes supposed to symbolize the female-genital ‘yoni‘ as four interlaced vesicas linked with mastery over the forces of nature.

The four interlaced vesicas are symbolic of the traditional wiccan medieval period belief that witches could control the wind and master the weather.

The cauldron, one of Wicca’s enigmatic symbols, stands for metamorphosis. It is linked to both the Roman goddess Ceres and the Celtic goddess Cerridwen (or Keridwen). When metal cauldrons gained popularity, the symbol’s original form—a wooden vessel or a gourd—became one of the hearths and the household.

The magic cauldron is fecundity and wiccan feminine power of transformation and has often been equated with the Grail.

The magic cauldron of the Celtic Goddess Keridwen has three powers that translate well to Wiccan symbolism;

Overall, we don’t see one universally recognized Wiccan Symbol that is more powerful than all the others. Although each witch or coven may nominate one of their own. In some cases they may create their own and imbue it with magic and meaning. Perhaps you have one in mind? If so, please tell us about it in the comments section of this article.

A number of the Wicca symbols, like the pentagram and the triple moon, are employed in ceremonies to represent the four basic elements. It’s possible that this pagan religion’s reverence for the planet and the natural world played a role in its rise to prominence in more recent times. If you would like to know more about our Pagan Symbols And Their Meanings dive in to read our extensive article. Thanks for visiting us, we hope to see you back here soon.

Are There Other Wiccan Symbols You Would Like Us To Write About?

Perhaps you see a Wicca Symbol in our list below and can’t find it in the pagan symbols article? Yes? Please do drop us a comment in the section below on the symbol you would like us to write about. Tell us a little about where you saw it and why is it curious for you?