Today’s post is about a seemingly simple yet really powerful symbol with a deep and beautiful meaning behind it; the unalome.

If you are a Buddhist, you probably already know what the unalome symbol means. If you practice yoga, you are familiar with it because the chances are someone in the class already has the unalome tattooed on them.

And if you are a tattoo artist, a hundred variations of the symbol were probably already etched into your mind because everybody wants it tattooed on them as the symbol has been becoming increasingly popular among tattoo lovers with every passing day.

But what does the unalome mean? Where did it originate, is it a Buddhist or a Hindu symbol ? Let us get right into it.

Is Unalome a Buddhist Symbol ? Where Did The Unalome Originate From?

The unalome (also known as unaalome) is an ancient symbol that has been found in both Hindu and Buddhist scriptures and artwork. It has originated from ancient India but it is not exactly known how and when.

So, it is fair to say that the unalome is both a Buddhist and a Hindu symbol.

If you would like to learn more about Buddhist symbols, check out our detailed post on the topic here.

Unalome Meaning and Symbolism Explained – What Does The Unalome Symbol Mean?

Before we get into the meaning of the unalome in Buddhism, it is crucial to provide you with some background information about the faith, assuming you are new to it.

In Buddhism, a person has to go through many struggles and suffering throughout their lives to get mature, wise and enlightened. Not only in just one lifetime, mind you, they believe in reincarnation, too.

Buddhists believe that to reach the ultimate state of enlightenment, which is called nirvana, one has to go through many cycles of death and rebirth (called samsara) during which they will experience immense suffering. Only after that, they can quench ‘the three fires’ that are greed, aversion and ignorance and become enlightened.

But how does it relate to the unalome symbol?

In parallel with this core tenet of the faith, in Buddhism, the unalome represents the path a person has to take in order to achieve clarity of mind and enlightenment.

The symbol starts with a spiral at the bottom. This spiral represents the start of one’s journey to enlightenment and fears, doubts and weaknesses one might have at this stage. There is a secondary meaning behind the spiral, however. It also represents how we, as human beings, struggle to let go of our earthly desires and belongings.

After the spiral comes the curves, loops, zigzags or endless knots before the line uncoils finally.

These loops, curves and zigzags represent the ups and downs, the twists and turns of a person’s life and the obstacles they will encounter during their lives before finally reaching enlightenment.

And then there are the dots at the end of the unalome. There are different interpretations regarding the meaning of the dots.

According to some experts, the dot (or dots), which is drawn a little bit further away from the main symbol, represents the uncertainty of life and that we fail to perceive that one final, ultimate truth.

The Unalome And The Arhats, The Enlightened Saints of Buddhism

The unalome is also used to represent the arhats (also known as arahants), the saints of Buddhism, and their struggle to attain nirvana.

Arhats are the people who have finally completed their journey, escaped the endless cycles of rebirth and reached the ultimate state of enlightenment. 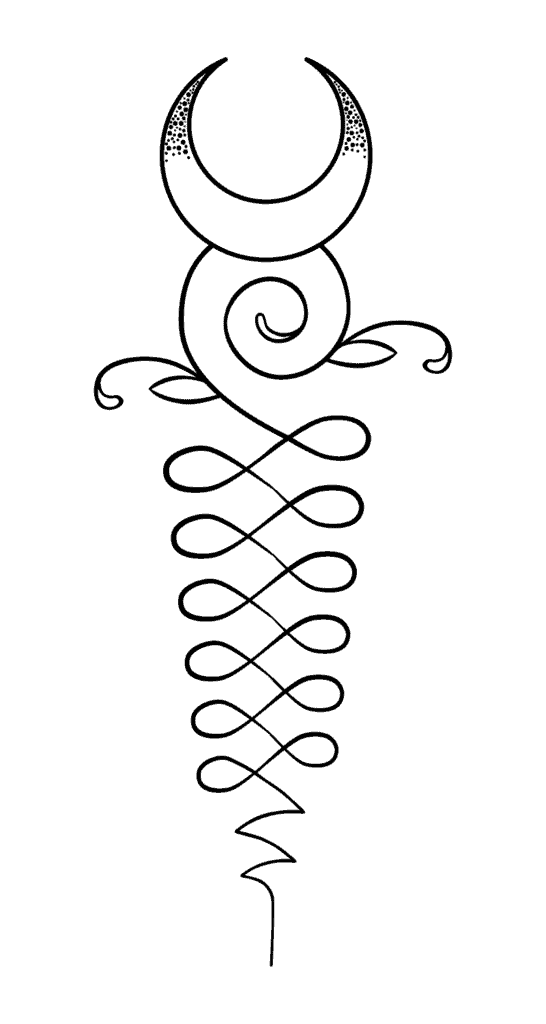 The spiral in the unalome symbol represents the crown part of an arhat, that is to say, the top of their head. The line that uncoils and finally becomes fully straight represents the arhats reaching nirvana.

The Unalome In Hinduism

The unalome’s meaning in Hinduism is much less complicated than what it represents in Buddhism.

In Hinduism, the unalome is considered as the symbol of the third-eye of Lord Shiva, one of the main deities in Hinduism, also known as the Auspicious One.

Through the third-eye of Lord Shiva, the un

alome represents wisdom, knowledge and, much like how it does in Buddhism, the path to perfection.

The Female And Male Versions Of Unalome Tattoos: The Difference

Is there a difference between a female and male unalome tattoo?

Although there is no real proof about this, there is a consensus suggesting a difference between female and male versions of unalome tattoos.

If the starting point of the spiral in the unalome looks right, that is an unalome symbol for males. If it looks left, that one is for females.

The Unalome And The Lotus Flower: Meaning and Symbolism

Did you know that the lotus flower is one of the most important symbols in Buddhism?

It is not only a universal symbol of strength and perseverance but also a symbol of rebirth, purity and spiritual awakening in Buddhism.
Being a symbol of rebirth and reincarnation, the lotus represents the endless cycles of rebirth in Buddhist faith as it rises out of the muddy waters every day, blooms as the beautiful flower it becomes and goes back down into the mud.

This cycle is repeated every day. That is why, the lotus is a really powerful representation of a Buddhist person’s struggle and journey to become enlightened.

The unalome, on the other hand, represents a person’s journey to enlightenment in spite of all the ups and downs in their lives and the obstacles they encounter.

Within this context, it would be quite accurate to say the unalome symbol and the lotus flower represent very similar concepts in Buddhism.
That is why when an unalome is used along with a lotus flower in a tattoo, the symbolism of enlightenment behind that tattoo is strengthened even more, it is ‘doubled’, if you will.

The enlightenment comes with the purity of the soul. As the lotus is also a symbol of purity, using a lotus flower above the unalome (together with or instead of the dot) symbolizing the final stage of enlightenment would make a beautiful and really meaningful unalome lotus tattoo.

If you would like to read more about the lotus flower, its meaning and symbolism, please kindly check out our detailed article here.

The short answer is no, not really. But, much like many other symbols held sacred in many different cultures, it also depends on where and how you use it.

While people are more strict and protective about some of the symbols representing their cultures, like the images of Buddha, as long as it is not used in an insulting or disrespectful manner, there is no reason an unalome tattoo should be considered offensive. However, there seems to be a consensus between tattoo artists suggesting it would be a better idea to have unalome tattoos on your upper body rather than on or around your feet.

Unalome Symbol And Its Meaning

And this wraps up our piece on the unalome, its meaning and tattoo ideas for this beautiful and powerful symbol. If you liked this post, you will probably enjoy reading our in-depth article on symbols of strength and perseverance here.

You might also like to read about Cho Ku Rei, a spiritual symbol that is used in Reiki practices, click here to read our extensive article.

Thanks for reading on Symbols and Meanings.

If you are looking to get inspired for unalome tattoo ideas, here is our gallery with even more pics featuring unalome designs for you to choose from.