The triple cross tattoo has become quite popular over the years. Most people prefer getting tattooed than getting a simple piece of jewelry designed for their body. In fact, tattoos have become a form of self-expression commonly used by both men and women.

The most famous part of Christian history is the cross, the cross on which Jesus was crucified. A cross tattoo is a way to remember the Creator and Son of God and keep your faith. It conveys a lot of spiritual energy and many people believe that it is the perfect tattoo design.

You can choose a design that will cover your entire body or a few small parts. However, you can get this tattoo design on your body even if you are not a Christian because it carries many important messages that everyone should see.

The image of three crosses is a powerful design. Many people who want to get a tattoo design of triple cross tattoo. If you are one of them, it is a good idea to look at some of the different tattoo designs including three cross tattoos to gain knowledge. So, you can choose the one that best represents your personality.

In this post, we give you a brief history of the triple cross tattoo and explain what it means and its design. We also provide you with some explanation of this tattoo and its traditional meaning.

What Is The History Of The Triple Cross?

Cross tattoos has been around for hundreds of years. One of the most popular reasons to get a cross tattoo is for its religious and spiritual significance. A cross tattoo is a symbol of Christianity. The cross is found in several religious texts, including the Bible. Christian soldiers in the Crusades would get crosses tattooed on their arms as symbols of their faith.

Christianity is a belief system founded on the central teachings of Jesus Christ, his divinity, sin and death, his resurrection, and his imminent return to judge the world. Most people believe that crosses come from Christian history. Before we go into its details, it is good to know the history of these three tattoos.

Rembrandt Van Rijn painted the scene in which Jesus Christ and the two thieves were crucified in the year 1653. The portrait is one of the most dynamic prints ever made. The Virgin Mary is seen weeping in this piece of art. A group of Roman soldiers on horseback are watching the crucifixion of two thieves and the Jesus and circling around them. A beam of light illuminates Jesus and the thieves, signifying the light from Heaven.

You can try to make the tattoo image exactly as it is because it is a great graphic. Most people with cross tattoos prefer to make only three crosses. If you want to create the entire tattooed scene to your body, then you should do it! Pick an area large enough to show the entire scene and make sure your tattoo artist is able to sketch the graphic.

Historical Meaning Of The Cross Tattoo in Christian Faith

There is no doubt that the three crosses are a powerful symbol. However, they have very different meanings. The first is the crucifixion, which is the death of Christ on the cross. This means that he was killed by God to save us all from sin. The second cross represents the resurrection, which took place after the death of Christ.

It happened on the third day, showing that Jesus rose again from the dead and showed himself to be alive. This is a miracle that took place right before our eyes. Finally, the last cross is the third coming of Christ.

This means that he will come back to earth to take away the sins of mankind. It will be the end of the world, and this will mean that everything will be forgiven and we will all be with God.

Did you know there are many different types of crosses? Each with distinct history and symbolism? We cover these in comprehensive depth with our article on the Different Types of Christian Crosses.

What Does a Triple Cross Tattoo Mean?

The meaning of a cross tattoo has become more secular, and it can mean different things to different people. Your triple cross symbol depends on your own beliefs and your religious affiliation. This design represents something that is very significant to you.

There are different meanings associated with the three crosses. Three crosses may be a symbol of Christianity. Many people choose to get triple cross tattoos because they believe in Christianity. It may also be a reminder of a death or the cross.

In addition to this, there are many different Christian beliefs that may be linked to a 3 cross tattoo. For example, some believe that it is a symbol of the holy trinity. The trinity is a Christian belief that is used to describe God as three persons: Father, Son, and Holy Ghost.

In addition to this, the trinity may also symbolize Jesus, the son of God. There are even people who say that it symbolizes the three virtues of the Holy Trinity: Faith, Hope and Charity.

Another Christian belief that is associated with a three cross tattoo is that it represents the crucifixion of Jesus Christ. Christians believe that Jesus died on the cross to save them from their sins. This is a major event that occurred in Christianity. Others think that it means that the three crosses together represent death and destruction.

What Does a Triple Cross Tattoo on the Face Mean?

A three cross tattoo meaning on the face that you have survived all of the problems that have come your way. You are a survivor, and you have overcome all obstacles. You’ve got the courage to move on in life. You have the strength to face anything that comes your way.

Why is The Three Cross Tattoo used?

Many people with three crosses on their bodies may have them for religious reasons. Some may have them for a very personal reason. It is used for both men and women, although it is usually found on the arm of women. It is a symbol of faith and devotion. It is a reminder that you trust in God and that you are dedicated to God.

Some people believe that cross tattoo charms and amulets protect them from evil. Some people also like these tattoo designs and still other people use them for the fun of it.

What Does the Triple Cross Symbol Represent?

The design of the three crosses represent Jesus and the two thieves that were crucified on the hill top.

Three crosses mean something to people because it reminds them of the crucifixion, death and resurrection of Jesus Christ. In the days of ancient Rome, the cross was usually the punishment for criminals. This meant that a person was nailed to a cross and was left there to die. Three crosses were used in crucifixion.

The cross also represents the Christian belief in the Trinity. There are three different persons in the Christian faith: God, Jesus Christ and the Holy Spirit. The cross is the most widely recognized symbol of this belief.

Which is the Best Place to Create a Triple Cross Tattoo?

The best place to get a tattoo is on your chest or neck. This is because it is the most visible location. Another reason why it is the best place is that it is close to your heart. The tattoo will feel more meaningful when you are around people who you care about.

You can also create 3 cross tattoo on your hands. It will also make a statement about your beliefs.  A lot of people like to look of a triple cross tattoo. Your tattoo will be visible when you not wear dress. 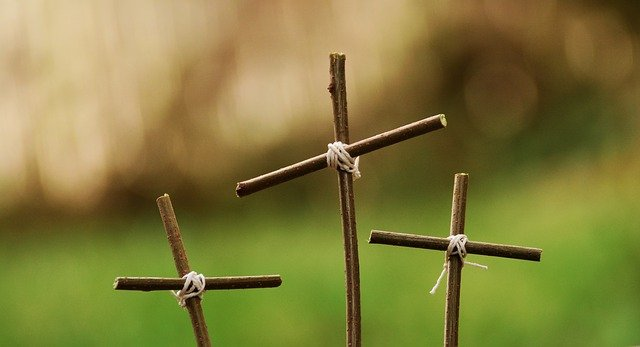 When it comes to getting a new tattoo, the placement of the cross is very important. If you want a unique tattoo, you might consider getting a tattoo with three crosses in it. The most common placement for three cross tattoo is on the upper arm, shoulder, chest, or back.

You can choose any design that you like, including placing all of the crosses on one arm, having three crosses on each arm, or having them placed on one side of the body. It is also possible to have your three crosses tattoo placed on your forearm, hand, or leg. Perhaps three across the chest is more your style? Upper Left, Centre Sternum and Upper Right Pec is a striking design.

A three cross tattoo design is a good tattoo choice because it’s easy to create. When it comes to designing your tattoo, you have many choices. You can have all three crosses arranged vertically, horizontally, in a triangle or with another shape.

You can also have them smaller or larger. You can place them next to each other or on opposite arms. As long as your tattoo is meaningful to you, it doesn’t matter what type of 3 cross tattoo you choose. You can also use three different colors to create a unique design. This will make your tattoo stand out from the crowd.

Perhaps you’re looking for something more controversial like an inverted triple cross tattoo? If this sounds like you, we suggest diving deep into our article on the Upside Down Cross Meaning and Symbolism before hitting the ink.

Does Wearing Three Crosses Protect You?

People in different cultures and societies have different beliefs about spirituality. For example, some people believe that wearing a cross around their neck will protect them from evil spirits. The first recorded instance of using a cross as a form of protection was in the 1st century during the time of Christ.

Christians who were being persecuted in Asia Minor wore a crucifix around their neck as a symbol of their faith. This three cross symbolized the death of Jesus on the cross. Because of this, Christians began wearing crosses as a protection against evil. Some people believe that it is fashionable to wear a cross necklace. Others believe that wearing a cross is superstition.

A lot of people think that wearing a cross will cause someone who sees you wearing a cross to pray for you. Three cross tattoo does is remind Christians of the suffering and death of Jesus Christ. When you wear a cross, it means that you follow Christianity.