If you were to show anybody the swastika symbol and ask of its meaning, then they would likely speak of World War II and the symbol’s links with fascism and the Nazis.

However, this was not the first recorded use of this symbol in history; in fact, the swastika dates back thousands of years and has previously held much more positive connotations. In this post we will have a look at the historic origins of the swastika, its meaning, and how it came to be used for one of the greatest acts of evil in world history.

Origins of the Swastika Symbol

Before Adolf Hitler adopted the Nazi flag, the symbol had already been in use for at least 5,000 years. In ancient India, in the Sanskrit language, the symbol translates literally into ‘well-being’. It has been used by countless generations of Hindus and Buddhists throughout history. The swastika was also a part of the Chinese writing system, adopted in Japan in the 8th Century. Temples, jewelry, pendants and other ancient artefacts have all featured this symbol, too. There are literally hundreds or more recorded uses of the symbol throughout the world prior to it becoming a symbol with negative connotations.

First recorded users of the swastika in Asia were within the Indus Valley Civilization around 3,000 BCE. It is also one of the more frequently used symbols on currency from the Mesopotamian era. In Asia, there are links to Chinese Taoism, as well as uses in Thailand as a salutation. Finally, it also features in links to the Bronze Age and Iron Age periods, particularly in findings from around the Caspian and Black Seas.

Use in East Asia

As early as the Liao Dynasty, which existed between 907 and 1125 AD, there have been recorded uses of the swastika. The symbol also appears as some of the first scriptures in early Buddhism, as well as representation of temple locations on maps. Both Chinese and Japanese languages and writings have featured the swastika at some point throughout early East Asian history.

Swastika’s Use in Ancient Greece

In Ancient Greece, many of the designs used for clothing and currency featured the use of single or interlocking swastika symbols. They have also been found within artistic works and architecture from Greco-Roman, Romanesque and Gothic periods, though they were almost exclusively used in interlocking designs to represent constant motion.

Swastika’s in Medieval and Early Europe

The swastika even feeds into religion, with the symbol representing a hooked version of Christianity’s Christian Cross. Some ancient places of worship are decorated with this symbol from an era where the Nazis did not yet exist. What’s more, swastikas have been used within artistic works and buildings from the Baroque and Renaissance eras.

Large, recognizable brands that still exist within the modern world began to adopt the use of the swastika as a good luck icon, even incorporating it into designs for products and advertisements. The American military even used the symbol on some of their early warplanes in World War I, though the symbol ceased to be used when the Nazi party began to rise to power in Germany.

How the Swastika Was Turned Into a Symbol of Evil

The origins of the Nazi party’s values links back to a time that precedes the Western world’s use of the swastika as a symbol for good. In the 19th Century, following some major archaeological discoveries, German scholars made links between ancient Indian texts that used the swastika, and their own German language. The hooked cross of the swastika was discovered on ancient sites in Turkey, and then connected to similar shapes found within ancient pottery in Germany. This caused the Nazis to draw links between their own ancestry and that of Hinduism and Buddhism. As a result, they conjured thoughts of a race of dominant, white warriors that they termed ‘Aryans’. 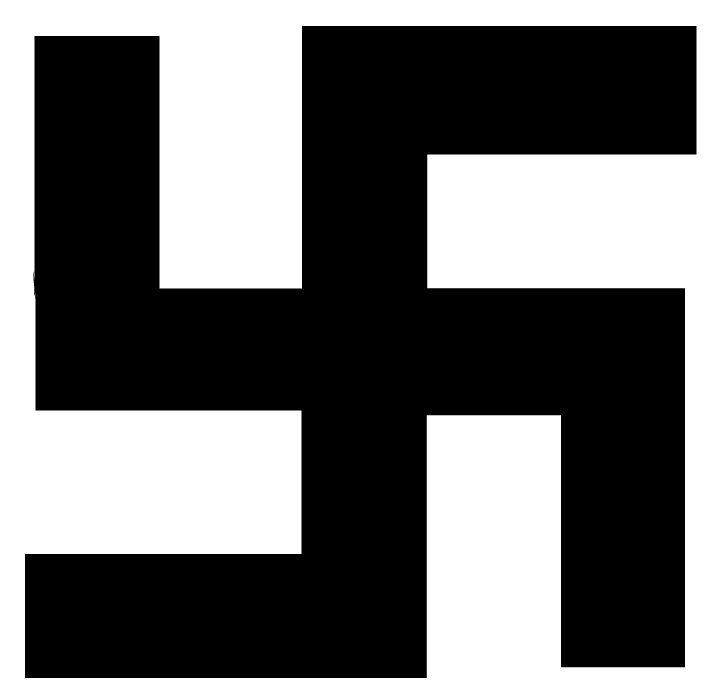 Contrary to the symbol of good represented in other countries, anti-Semitic organizations began to use the swastika as a representation of Aryan ideals, promoting the idea of white power and an ancient bloodline to the German people. Then, in 1920, the Nazi party fully adopted the use of the Nazi flag, featuring a black swastika within a white disc, on a red background, as their identity; it was Hitler himself who designed the flag, describing the process in detail within his book, Mein Kampf.

“I myself, meanwhile, after innumerable attempts, had laid down a final form; a flag with a red background, a white disk, and a black swastika in the middle. After long trials I also found a definite proportion between the size of the flag and the size of the white disk, as well as the shape and thickness of the swastika.”

Due to the symbol’s links to the Nazi Germany era, the swastika has been mostly tied to Nazism since the 1930s, with the West considering it to be a symbol of racism and white supremacy ideals. In some countries, including Germany, the symbol is now banned and has been scrubbed from some buildings that were once marked with swastikas.

Now, the swastika is a symbol of recent history, and it remains to be seen whether the symbol will be used again for different purposes at any point in the future. However, there are a number of more recent religious movements that have incorporated similar forms of the swastika into their symbols.