Carrying on with our article series on spiritual symbols, we will examine the sacred geometry symbols and their meanings in today’s post. Here is our extensive list detailing what all these fascinating symbols and shapes represent.

The Flower of Life is a sacred symbol that represents origin and shows how everything in the universe is intertwined through the circle of life. This symbol is an amalgamation of the seed of life, the egg of life, and the fruit of life.

The Flower of Life is assumed to be a blueprint for existence, and it is present in multiple cultures and religions, including Judaism and Christianity, sometimes displayed in their religious places of worship.

This pattern is made of seven circles representing the seven days of creation, and this shape is a building block for the flower of life. The central circle represents the source, or God.

The other six rings are linked to the source as well as with each other, to show the interconnectivity in the process of creation. The Seed of Life pattern is also found in many religious monuments, and it dates back to the ancient Egyptians who incorporated the symbol in the Osirian Temple.

Hamsa is also spelled as khamsa, chamsa, and hamesh is the next item in our list of sacred geometry symbols. The symbol represents the hand of a supreme being and it is shaped like a human hand. It is believed to have the power to bring luck, health, protection, and prosperity, which is why it is featured in different cultures in the Middle East and Africa, where it is also known as the Hand of Fatima and the Hand of Miriam.

The Tree of Life is created by linking ten points with the intersection lines between seven circles, and it is considered a representation of man’s link with the universe and the nature of God.

It is a prominent symbol in Judaism and the Kabbalah as it highlights the ten spiritual symbols or Sephiroth, which represent God.

The Egg of Life appears as a cluster of seven circles similar to the seed of life without complex overlaps, and it resembles a group of cells in an embryo.

This shape represents health, fertility, and stability in many cultures as it encourages balance in life, even in the initial stages. Additionally, it also establishes the framework for music along with physical and mental development.

Metatron’s Cube includes all five platonic solids embedded in the complex shape, and it represents creation as it incorporates both masculine and feminine elements that give rise to life.

In the spirit of creation, this shape also reflects the five elements linked to the constituent platonic shapes. The cube shares the same name as the Archangel Metatron in Christianity, who was responsible for energy flow in creation.

There is a unique an reportedly powerful Merkaba Meditation practice with Metatron’s Cube visualization. 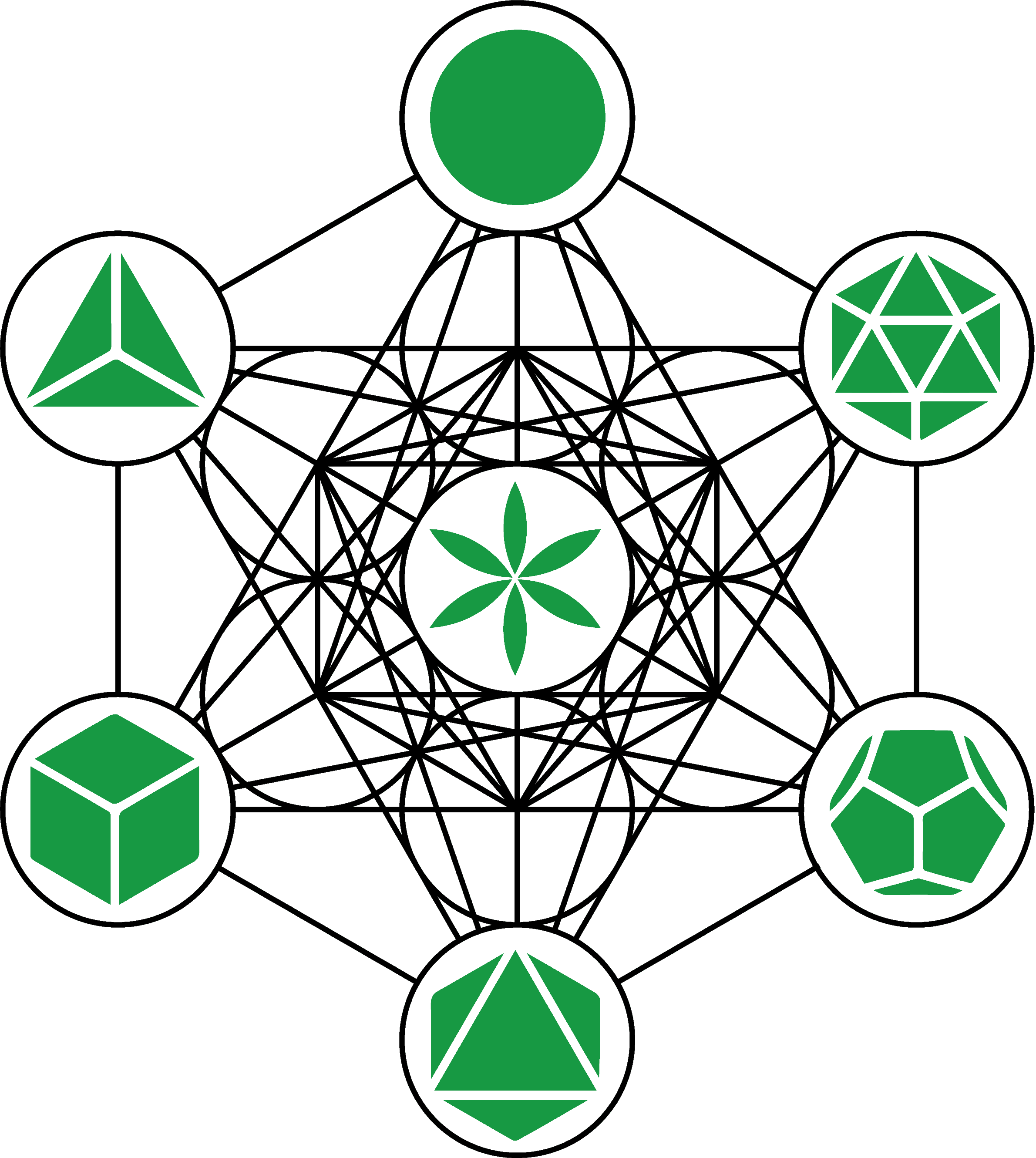 Vesica Piscis is also known as the bladder of the fish due to its shape – it consists of two overlapping circles forming an ellipse in the center.

This symbol represents connections between the physical and spiritual elements while also symbolizing birth and fertility. In Christianity, it is also associated with Christ’s Ichthys symbol.

This symbol is alternatively known as the Tibetan Knot and the Endless Knot. The pattern is closely linked with Buddhism and Hinduism as it is a highly regarded symbol that represents spirituality, time, and divinity.

It has also been considered a representation of rebirth as the shape does not have a starting or ending point.

The Star of David

The Star of David is made of two overlapping equilateral triangles, which produce a star with six sides. The symbol is highly prevalent in Jewish religion as it represents the link between the creator, his creation, and his revelations.

The symbol has also been used since the time of King Solomon, and it is associated with meditation and peace as it fits harmoniously and perfectly within a circle.

The torus is created by rotating a circle about an axis giving it the appearance of a spiral. It represents balance and symmetry between spirituality and physical presence by influencing and redirecting energy.

The shape influences balance and harmony within the universe to ensure the cyclicality of energy.

This six-faced shape is one of the five platonic solid shapes that emerged from Metatron’s Cube, and in its most standard form, it is also called a cube.

It is known to align your energy with the earth and nature as it is a representation of the element of Earth because of its flat base, which provides stability. The hexahedron is believed to have the ability to influence the spirit as it can have a grounding effect that can enhance focus and reduce stress.

The icosahedron has twenty faces with twenty equilateral triangles, and it is also a part of the group of platonic shapes. This shape represents water in terms of fluidity, flow, and embracing change while also being linked to emotions associated with the Sacral Chakra.

This shape allows us to embrace the flow of life and encourages us to exhibit freedom of expression and creativity.

The tetrahedron’s origin dates back to Pythagoras, and it has four faces which correspond to four equilateral triangles. This shape represents fire, so it is linked with passion, motivation, and physical concerns while also being related to the Sun, making it a powerful conduit for unlimited energy.

Introducing balance is also one of the key associations with the shape in different cultures, considering the stability offered by each side of the tetrahedron, which can act as the base.

The octahedron has eight faces with eight equilateral triangles making it a platonic solid shape. This shape represents air, and it is linked with the Heart Chakra, which is linked to compassion, love, forgiveness, and empathy.

It is associated with spiritual energy as it allows us to understand our true nature through acceptance and healing.

The final item in our list of sacred geometry symbols is the dodecahedron. The dodecahedron has 12 faces and 12 identical pentagons, and the first mentions of this shape come from the works of Pythagoras.

This shape represents the universe or ether and is linked with higher-level chakras in Hinduism, including the Third Eye Chakra and the Crown Chakra, which relates to intuition, consciousness, inspiration, and harmony. It can help establish a deeper connection with your energy and that of a higher power.