We will be discussing Metatron’s Cube, one of the most important sacred geometry symbols, in today’s post. What does the symbol represent? Why is it named after the archangel?

What are the common uses for it? The answers to all these questions and more are given in this article. Without further ado, here is all you need to know about Metatron’s Cube, its meaning in sacred geometry, origin and uses.

The Origin of Metatron’s Cube

Although most people are familiar with famous archangels like Gabriel, Michael and Azrael, there are several other divine beings that hold the title of an archangel. One such entity is Metatron, who is also mentioned in Islamic, Christian and Judaic theologies and is often considered to be a scribe of God.

In some traditions, it is believed that the archangel was the human incarnation of the prophet Enoch. After his ascension, Metatron was given the task of keeping the records of all the choices made in earth and in heaven in an archive known as the Book of Life. Because of this status, Metatron was believed to be at the top of the Tree of Life in Kabbalah.

In many representations, Metatron is depicted holding a cube, called eponymously as the Metatron’s Cube. This symbol is believed to be a metaphor for the universe and signifies that everything in the universe is interconnected with each other.

Sacred Geometry of the Metatron’s Cube

The Metatron’s Cube, also known as ‘the Metatron symbol’, has great significance in sacred geometry, which is the study of mathematical formulas and shapes to understand the universe. But how was it introduced to the world, who discovered Metatron’s Cube?

The Cube was first discovered by the Italian mathematician Fibonacci, and its three-dimensional graphics is considered to have roots in the so-called Nature’s First Pattern.

Metatron’s Cube is depicted by a Fruit of Life shape or a central circle. This circle is surrounded by six same-sized circles forming a shape of the flower, the Flower of Life. Each of these circles then gives birth to one circle of the same size, making a total of 13 circles.

These circles are connected to each other with a series of straight lines, which represents the flow of energy between all things in nature.

These interconnected lines also form the shapes of the Platonic Solids, which are named after the famous Greek philosopher, Plato. The Platonic Solids are each associated with the main elements that the ancient Greeks believed made up the universe.

Tetrahedron: The four triangle faces that are associated with the element of earth.

Cube: The six square faces that are associated with the element of water.

Octahedron: The eight triangle faces that are associated with the element of air.

Dodecahedron: The 12 pentagram faces associated with the element of fire.

Icosahedron: The 20 triangle faces that are associated with the spirit.

Hence, the Metatron Cube symbolizes all that exist in the universe created by God and these shapes symbolize the building block of the physical and spiritual world. These three-dimensional shapes appear in all creation, showing the relationship between all things from patterns in snowflakes and seashells to the formation of the cornea in our eyes and the DNA in all life.

The Metatron Cube explains the three-dimensionality of space and everything that resides within it. It is believed to help us understand how God has structured the physical plane around us and is connected with the metaphysical world or the spiritual realm.

The complex sacred geometry of the Metatron Cube indicates that God has created the entire universe according to a specific geometrical plan.

The Symbolism of Metatron’s Cube, the Meaning Behind the Symbol

Metatron’s Cube is meant to symbolize the journey, transfer, and interconnected nature of energy across the cosmos and the balance and harmony in the universe.

The straight lines connecting the circles symbolize the feminine and masculine duality of nature that remain intimately tied together indicating that everything in the universe is interconnected with each other. If you pull one string, its vibrations will be felt in every connected string and element.

Metatron’s Cube is also a representation of the constant flow of the energy in the universe. Although the point of origin of the energy may be the Tree of Life that Metatron guards, the energy moves through the archangel and can travel to the furthest reaches of creation.

Believers say that Metatron ensures that all energy maintains its proper balance so that all elements of nature remain in harmony.

Since the Cube represents the equilibrium of elements and energy, it can be used as a tool to connect with the Archangel Metatron in order to promote stability and peace.

Ancient scholars also believed that people can derive inspiration from the Cube which can be used for personal transformation. By contemplating the patterns of the Metatron Cube, people can achieve spiritual progression and enlightenment and gain inner knowledge of the divine forces that rule the universe.

How to Use the Metatron’s Cube

This complex geometrical symbol has varied uses. Here are some of the most popular ways how Metatron’s Cube came to be used:

The Metatron’s Cube serves as a guide and people can follow the patterns of energy starting from its center and radiating outwards. Within the complex patterns like basic and simple shapes and watching the interplay between these symbols can be very soothing to the spirit.

In addition, people believe that Metatron’s Cube can help them find solutions to the problems they are dealing with in their daily life and unravel the mysteries and meanings behind the forces of the universe that govern us.

Metatron’s Cube and Merkaba Meditation are combined in a unique practice of the sacred geometry visualization, mindful breathing and chakra awareness.

Believers of Metatron’s Cube use it as a tool for eliminating lower energy and promoting healing. In ancient times, Metatron was considered to be the entity behind the urge to change negative thoughts into positive ones.

With the help of Metatron’s Cube, people can disperse and keep negative energy at bay and move forward with positive energy coursing through them.

Aside from being a guardian angel, Metatron is also the spirit of inspiration and creation. Artisans or people who just want a little bit of inspiration would keep the image of Metatron’s Cube in their minds so that they can open up to the positive energy of the universe.

As such, many believers of the archangel hang the image of Metatron’s Cube on their walls so that they can always have a visual focus for jog their creativity.

Metatron’s Cube is also a symbol of protection against darker energies and influences. Believers put the Metatron’s Cube symbol on the doors and windows of their homes to ward off evil spirits and energy and to welcome a positive flow of energy into their homes.

Some people also wear it as jewelry or get it tattooed on their body so that they can shield themselves from the negative forces and become a conduit for divine light and energy.

Metatron’s cube is mainly a symbol of balance, therefore, it would be the ideal choice if you are looking for a tattoo that represents the concept of inner balance and harmony. If you are a spiritual person who enjoys practices like meditation and yoga, the cube of Metatron is the perfect tattoo for you.

This sums up our post about Metatron’s cube, its various meanings, origin and history. Hope you enjoyed reading, please remember to share the content if you did.

Please feel free to link and share the sheet below. We do ask that you give our little symbols site credit so we can research and write more interesting content for our readers. 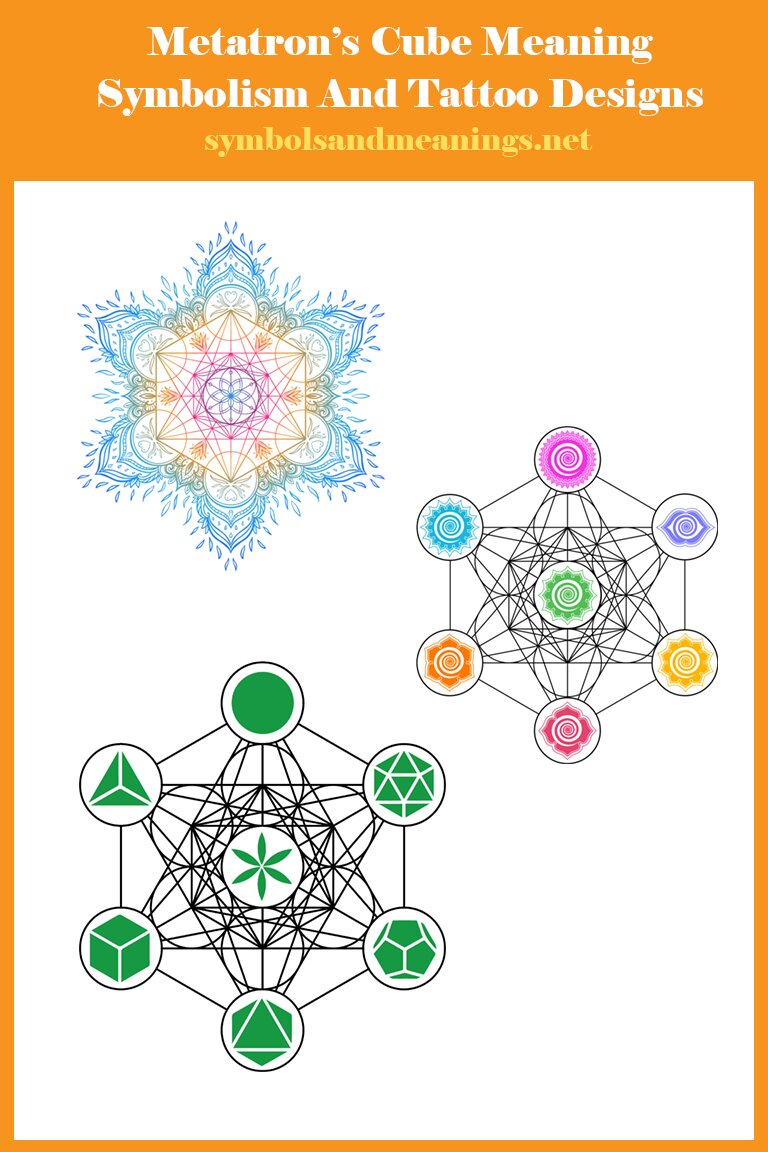