Lets talk about Lust, you know you want to. Though we seldom define the word “lust,” we all agree that it refers to an excessively strong desire for something. Although the usual connotation is sexual, you can lust for anything, even food (which is probably gluttony) and other people’s success (which is probably jealousy).

When it comes to visual representation of lust as a concept, which lust symbol comes first to your mind? Why do you think that is?

Lust in the seven deadly sins meaning context is often been frowned upon in public discourse. Why is that? We’re all busy judging each other for ubiquitous human desires? Or is it more about judging ourselves and projecting that onto others? Either way, it is not something that is freely discussed. However it has always been a common motif in literature and art. One of the characteristics that distinguish humans as a human is their intense desire, whether it is for power, money, or sexuality. Art and literature seem to be common playground for us to express this and share ideas.

Lust is a strong desire, whether it is for another person sexually or an unquenchable thirst for anything like money or power. Although some religions view desire as a sin, some scientists contend that it is simply a physiological response that humans have. Cognitive Psychologists and Philosophers having often waded deep into this discussion to help shine a light in the places we can often fear to tread. Is there any reason why we should fear it?

According to studies, pheromones, androgens, and other hormones interact to support the human desire for reproduction. A strong sexual urge for another person is referred to as lust. It is what first draws us to a possible spouse/partner and is often a key aspect of what keeps the flame of desire burning in a long-term committed relationship.

Symbols of Desire and Lust

Animals Of Lust: Goats and Cows

Typically, cows and goats are the two species of animals used to symbolize passion. There may be a connection between the Egyptian goddess Hathor and the notion that cows represent passion. Most often, she appears as a cow or as a lady with a cow’s head.

Hathor the goddess was first portrayed as a harsh deity who sought to punish people for their crimes, but through time she evolved to represent compassion and benevolence.

Due to its Christian representation of the devil, the goat was also thought to symbolize desire. Yet in Chinese culture people born in the Year of the Goat are generally gentle, shit, stable, amicable, kindness and have a good sense of justice. Quite the contrast to any symbols of lust.

The Symbolic Color Of Lust is Blue

Blue is frequently associated with passion. Blue is the color most frequently linked with lust, even though different tones of the color may signify opposite concepts like loyalty and trust.

Even more perplexing is the fact that blue is frequently associated with the Virgin Mary in Christian art, denoting purity and virginity.

Because of their white tint, calla lilies frequently represent purity, yet in Roman mythology, they stood for passion and sensuality. Venus, the goddess of passion and love, allegedly once beheld calla lilies and was envious of their beauty.

The Fruit of Lust is an Apple

Apples were mentioned in the Bible and Greek mythology, and they have come to represent desire. In the Old Testament, Adam and Eve were content to dwell in paradise until the devil appeared to them as a serpent and tempted them.

The apple was also regarded by the ancient Greeks as a sign of lust and love.

But how, exactly do they keep the Doctor away?

Take a photo at the right angle, add in some lipstick and…… well, it’s not really biblical.

The seven behaviors or emotions that encourage more transgression are considered the seven deadly sins in Roman Catholic theology. Typically, they are listed in this order: arrogance, desire, gluttony, anger, and pride. The lust seven deadly sins meanings are listed here, along with descriptions and comparisons of each.

The most common definition of lust is an excessive or unhealthy sexual urge. But since it derives from the Latin term luxuria, which denotes exuberant, exaggerated, or even riotous conduct, we occasionally find it employed in different contexts.

Let’s compare and contrast once the definitions and antonyms have been covered. All of these sins are manifestations of some sort of lust or desire that will result in death. 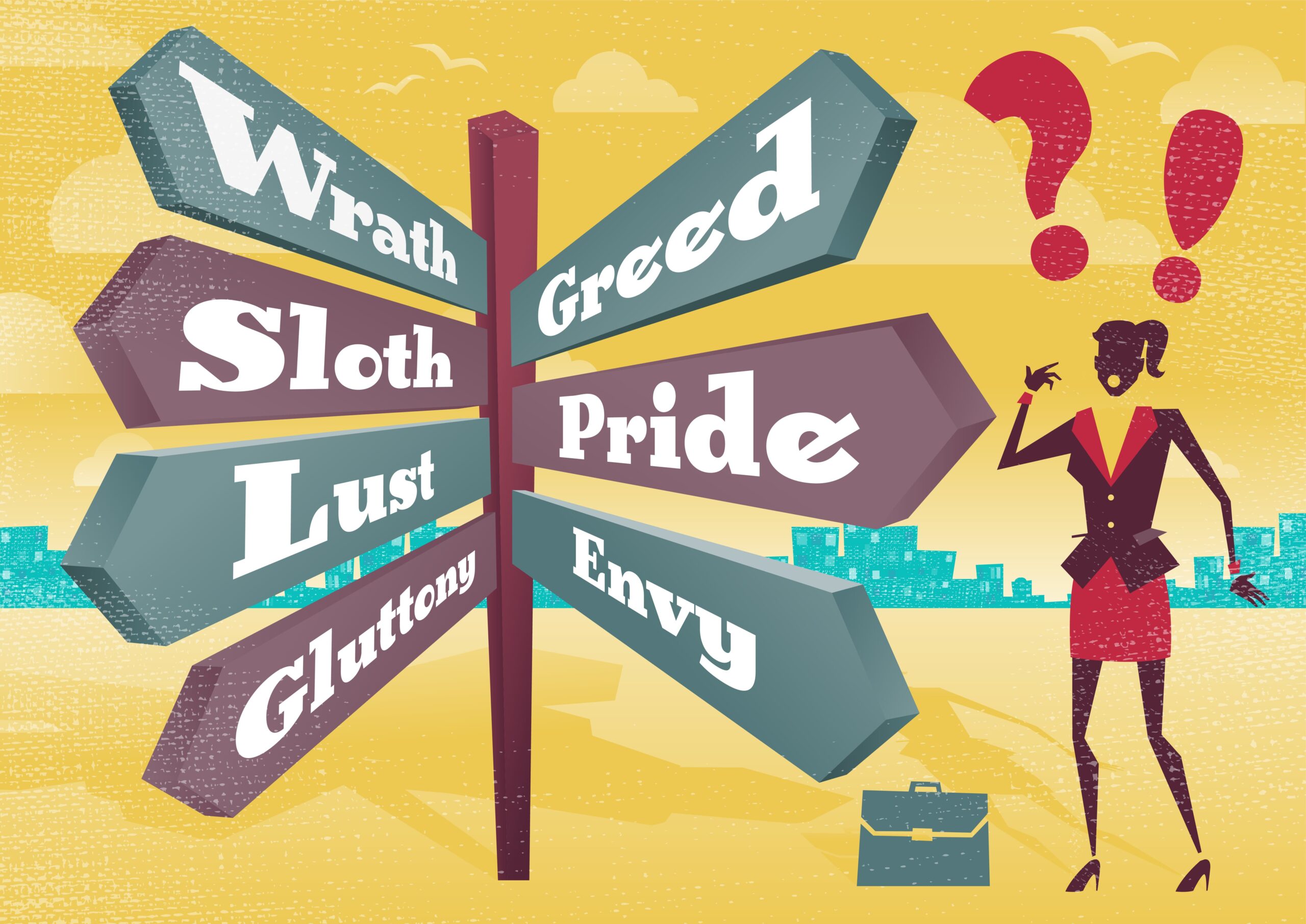 The need for pleasure. Biblically, it’s the desire to get to know someone, but historically, it also applied to all other sins of luxury or bodily desire (like drug addiction).

Chastity is the opposite of  Lust. (Did you know the original meaning of chastity was closer to “monogamy” than “abstinence”)

Greed is a craving for things. Avarice is sometimes referred to as “greed,” but it also encompasses hoarding money and spending it without purpose. Additionally frequently linked to ambition is greed.

What do we get when we combine Lust and Greed?

Charity is the counter-virtue to Greed.

Gluttony is a desire for excess. This sin is generally always connected to overeating in popular culture, which is a good start, but theologically speaking, it refers to any type of overconsumption. A crucial component is taking more than your fair share and discarding the surplus. In more recent times, it has also been compared to all forms of addiction.

What do we get when we combine Lust and Gluttony?

Temperance is the virtue opposite of Gluttony.

Envy is the desire to own the successes of others as well as the hatred of those successes and the desire to sabotage them. Because it fosters conscious and active hate of others, envy is sometimes ranked as the second-worst sin after pride. Thieves of all stripes are more likely to act on this than not (also driven by Greed).

What happens when we combine Envy and Lust?

Pride wants to Be Noticed.

What happens when we synergize Pride with Lust?

Sloth is the desire for rest in excess. Sloth includes a lack of motivation to complete tasks, apathy toward obligations, and moral apathy, which refers to disregard for doing what is right and the suffering of others.

Can Sloth and Lust co-exist?

Wrath is the desire for Harm. Ironically, despite being the third worst sin, wrath is the most likely of the deadly sins to be committed by heroic characters or connected to good intentions.

What happens when one combines Wrath and Lust? I hate to think!

Simple Comparisons of Lust with the other 7 Deadly Sins

A Poem on Biblical Lust

Stay away from sexual sin,

And the lust that corrupts within;

Every sin that does the man,

Will be against God and His plan.

Other sin that people will do,

Is very wrongful that is true;

But sexual sin is very quick,

To make your body earthly sick.

For your body is a temple,

This according to the Gospel;

Belongs to the Holy Spirit,

It drives Him out from your merit.

The Holy Spirit is from God,

To whom you should honor and laud;

A gift received and lives in you,

When you have the love that is true.

Any sin that you may commit,

Will be causing you to forfeit;

And can topple your foundation,

With the joys of your salvation.

Do not let my words be ignored,

Bring on the glory to the Lord;

And stay away from sexual sin.

Because you were bought with a price,

So never let the lust entice;

Or you could be walking a path,

Where God is waiting with His wrath.

Due to its emotional and physical potency, lust symbolism has been a common theme in mythology, religion, and literature. We have more detail in our article on the colors, symbols and animals of the seven deadly sins.

Thankyou for reading with us, come and visit again soon to learn about our constantly updated lists and research on symbols from human culture and history.