In today’s post, we will be having a detailed look into the ancient symbol named the Leviathan cross also known as the Satanic cross, the infinity cross, the sulfur symbol, the sigil of Leviathan and the Leviathan symbol. Here is everything you need to know about the symbol, its meaning, origin and history.

It has been used as the sulfur symbol in alchemy for a long time before it became the symbol of Satan. There are no records indicating an exact date but it is known to be a very old symbol as alchemy has existed as a discipline since ancient times.

So, how did the sulfur symbol end up to be the Satan’s cross?

The symbol became the Leviathan cross, also known as the Satan’s cross and the brimstone cross, when Anton LaVey, the founder of the Church of Satan adopted it as the emblem of his church in 1960s.

It should be noted that there are no accounts in history attributing the sulfur symbol to satanism before LaVey adopted it.

To understand how and why the symbol came to represent the Church of Satan, we need first to understand the concept of satanism in the way it was employed by Anton LaVey.

LaVey possessed a charismatic personality, owing to which he gained quite a bit of fan following. In 1966, he founded the Church of Satan, which he intended to be a counter-religion for all those who, like him, wanted to reject traditional Christian morality.

A few years later, he published the Satanic Bible. In this holy book of his faith, he wrote a ‘satanic’ rendition of the Ten Commandments, ‘The Nine Satanic Statements,’ on top of which he placed the sulfur symbol.

Anton LaVey was the one to actually name the alchemy symbol for sulphur as the Leviathan cross . The name holds substantial significance, which we shall discuss later.

LaVey’s main point of disagreement with Christianity was that it bred conformity in humans by asking them to go against their nature.

His sect of Satanism was secularized and atheistic. He did not believe in God or Satan’s existence and believed in and promoted a sort of ethical egoism.

In his own words, the foundation for his belief was that he saw men bow their heads in prayers at church, only to see the same men attend burlesque shows on the weekends.

Satanism revolves around Satan’s worship, which is an entity representing absolute evil in several religions, including Christianity and Judaism.

There are different groups within the Church of Satan. Some preach normalization of ‘evil’ practices while others employ a wide range of magical and mystical practices.

The satanic cross comprises a double cross at the top and an infinity symbol at the bottom. That is why it is also called the infinity cross.

The double cross, also known as the Cross of Lorraine, might be interpreted to represent several things.

In the context of its use as a representative of the Church of Satan, it symbolizes protection and the balance between humans. The infinity symbol at the bottom represents the entire universe.

To put two and two together, the Church of Satan uses the Leviathan symbol to mock the Christian belief and depict that humans are their own center of balance and do not need God or any other mythical creature to ensure balance in the universe.

In a way, the Leviathan symbol states that the existence of humans alone is the ultimate truth, which is the fundamental belief of the Church of Satan.

LaVey believed and taught that human values such as rebellion against injustice, self-assertion, fight against unjust authority, pure wisdom – one not defiled by external influences or teachings such as religion, and vital existence is, “His Infernal Majesty.”

In this sense, the Leviathan cross can be interpreted as a direct representation of these values and beliefs of the Church of Satan.

Examining the Symbolism Behind the Satanic Cross Further

There are few things that are common in all sects of Satanism, including the travesty of existing Christian symbols and traditions, the rebellion against conformity and the denunciation of the concepts of good vs. evil.

Keeping that in mind, we can deduce that the decision to use the alchemy symbol for sulfur to represent Satanism can be based on several reasons.

Sulfur was in antiquity, referred to as brimstone, of which there are several mentions in the Bible, all in relation to the devil and hell. The concept of hell is one of the major foundations of Christianity.

What better way to mock the concept of hell than to use the symbol of sulfur to represent the Church of Satan?

Sulfur is also one of the most essential elements for life on Earth. Spiritually, it represents the human soul.

As discussed earlier, Anton LaVey’s Satanism was more or less a form of ethical egoism, where he believed every Satanist to be God.

The use of the symbol for the human soul to represent the church can also be a direct announcement that there is no greater being than the human soul.

In alchemy, too, sulfur represents three main qualities; masculinity, heat, and dryness. These qualities are also associated with hell in many cultures.

The use of the symbol can also represent the acceptance of traits meant to scare worshippers into submission or conformity to Christianity’s beliefs.

The Leviathan is a biblical monster that is often associated with Satan. It goes by many names in different scriptures, including a sea serpent, sea monster, and even a multi-headed sea serpent.

In the Old Testament, the Leviathan is a multi-headed serpent that God kills to provide food for the Hebrews. In Isaiah 27:1, too, God destroys the Leviathan, a sea serpent, an enemy of the Israelis.

Put simply; it is a mythical creature that changes shape in the scriptures, but never characteristics. It is an evil monster that must be defeated to depict the triumph of good over evil, victory of God over Satan.

Mocking God and religion in this way is probably the main reason why Anton LaVey renamed the symbol of sulfur the satanic cross.

Today, along with symbols like the Sigil of Lucifer and the upside down cross, the Leviathan symbol is one of the most popular occult symbols used by Satanists.

People wearing a Leviathan cross tattoo usually have it to represent their Satanist faith. However, as it is about rejecting traditional values and rules, the Leviathan symbol makes a really nice rebellion tattoo as well. Not to mention the symbol has nice symmetry and looks good on a tattoo. 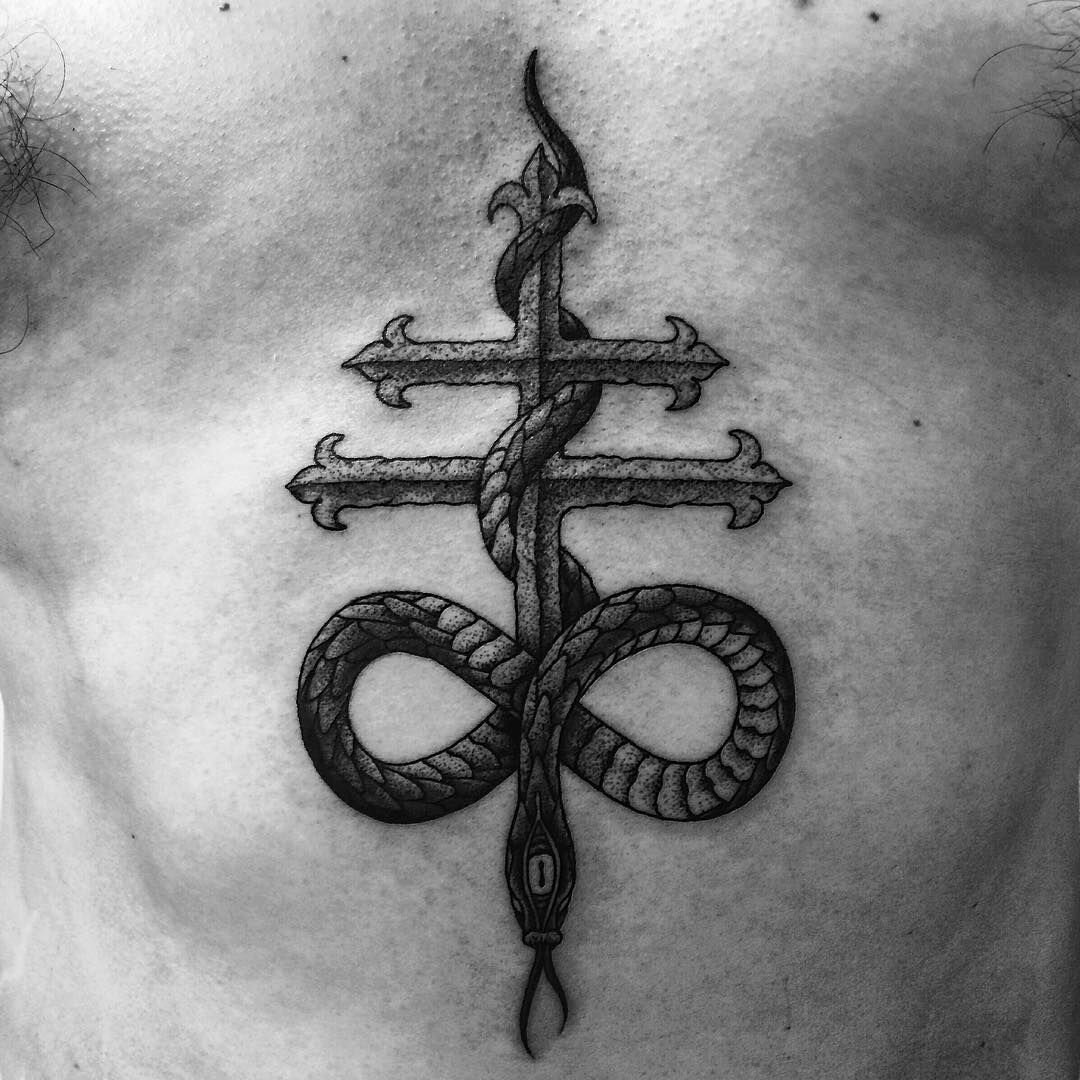 Another reason why a person would choose to have a Leviathan cross tattoo might be because they are interested in practicing alchemy and magic. In that sense, it would make a nice ink for people of Wiccan and neo-pagan faith especially.

That concludes our post about the Leviathan cross symbol, its meanings and origins. We hope you enjoyed reading about Symbols & Meanings. If you would like to read our detailed article on satanic symbols and their meanings, please click here. 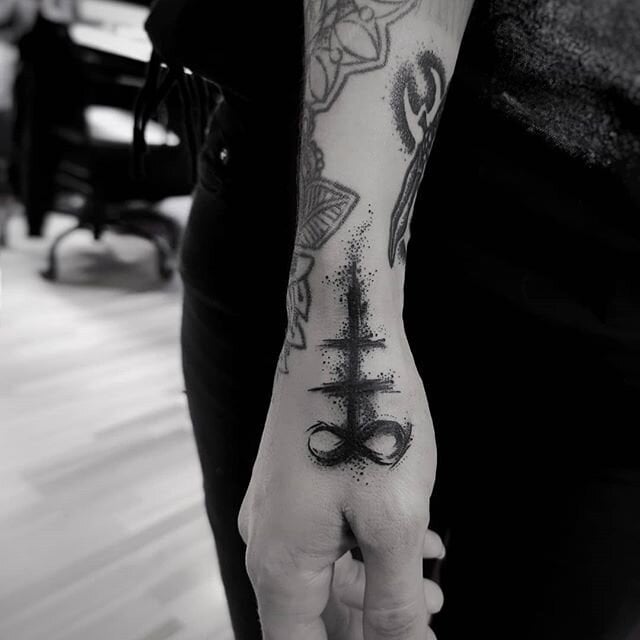 Please feel free to link and share the page below. Give credit to our little website so we can keep researching and writing great new content on symbols and their meanings.