Being one of the most prominent ancient civilizations that highly valued both culture and spirituality at the same time, ancient Egyptians were quite ingenuine in their use of symbols, most of the time painted as hieroglyphs on obelisks and temple walls, to document discoveries and pass on cultural knowledge.

Symbols played an important role in the history of every culture but one would argue that the ancient Egyptians took it to another level. And undoubtedly, one of the most important ancient Egyptian symbols is the Eye of Horus also known as the Wedjat eye. But who is Horus in Egyptian mythology?

Horus, the God of the Sky and Kingship

The Wedjat eye symbol literally represents the eye of the Egyptian God Horus known as the god of the sky and kingship and the protector of Egypt’s rulers. Many hieroglyphs represent Horus as a man with a falcon head, and in some, he is the falcon itself.

He is the son of God Osiris and Goddess Isis and goes by many names, including Horus, Hor, Her, Har, and Heru.

Horus is undoubtedly one of the most loved and well-known Gods of the Ennead, a group of nine deities worshipped at one of the most significant ancient Egyptian cities, Heliopolis.

Throughout Egyptian history, there are several references to Horus appearing as a god in several places, but under different names.

Some of them include Harmakhis (Horus in the Horizon), at Kawm Umbū, as Haroeris (Horus the Elder), Harsiesis (Horus, Son of Isis), Harpocrates (Horus the Child), and Harakhte (Horus of the Horizon, which is also strongly associated with the sun god Ra/Re.)

The Myth of The Eye of Horus Symbol

Osiris had two siblings, one of whom, Set, the God of chaos, envy, fire, discord, trickery, storms, and desert, wanted Osiris’s throne – his birthright as the eldest son – for his own.

Falling victim to his greed for the throne, Set killed his brother Osiris and proceeded to dismember his body into fourteen pieces and threw them in different places across the land.

However, Osiris’s wife, Isis, with Horus, her son, and Osiris’s sister Nephthys and her son, Anubis, embarked on a quest to find all the pieces of Osiris’ body.

They managed to bring together all the pieces, and after joining them, gave Osiris a proper funeral thanks to which he was able to enter the underworld and take his place as the ruler of the dead. That is how he came to be  the God of resurrection, transition, and regeneration.

Isis raised Horus, who had vowed to avenge his father’s death, on her own. Once Horus reached adulthood, he faced his uncle, Set, in a series of battles, and he eventually defeated him.

The final battle between Horus and Set is often used to illustrate the victory of good over evil. During the long fight, both Horus and Set were heavily wounded. Horus lost his left eye and Set lost his testicles.

Many accounts quote the loss of the testicles as the reason why Set represents the desert, which is barren. However, different legends recount different tales about how Horus lost his eye.

Some state that Set pulled out Horus’s eye and tore it into six pieces, throwing them in different places, as he did to his father’s body.

In another account, Horus himself tore out his eye to resurrect his father and protect his family, so the eye is considered to be a symbol of sacrifice. 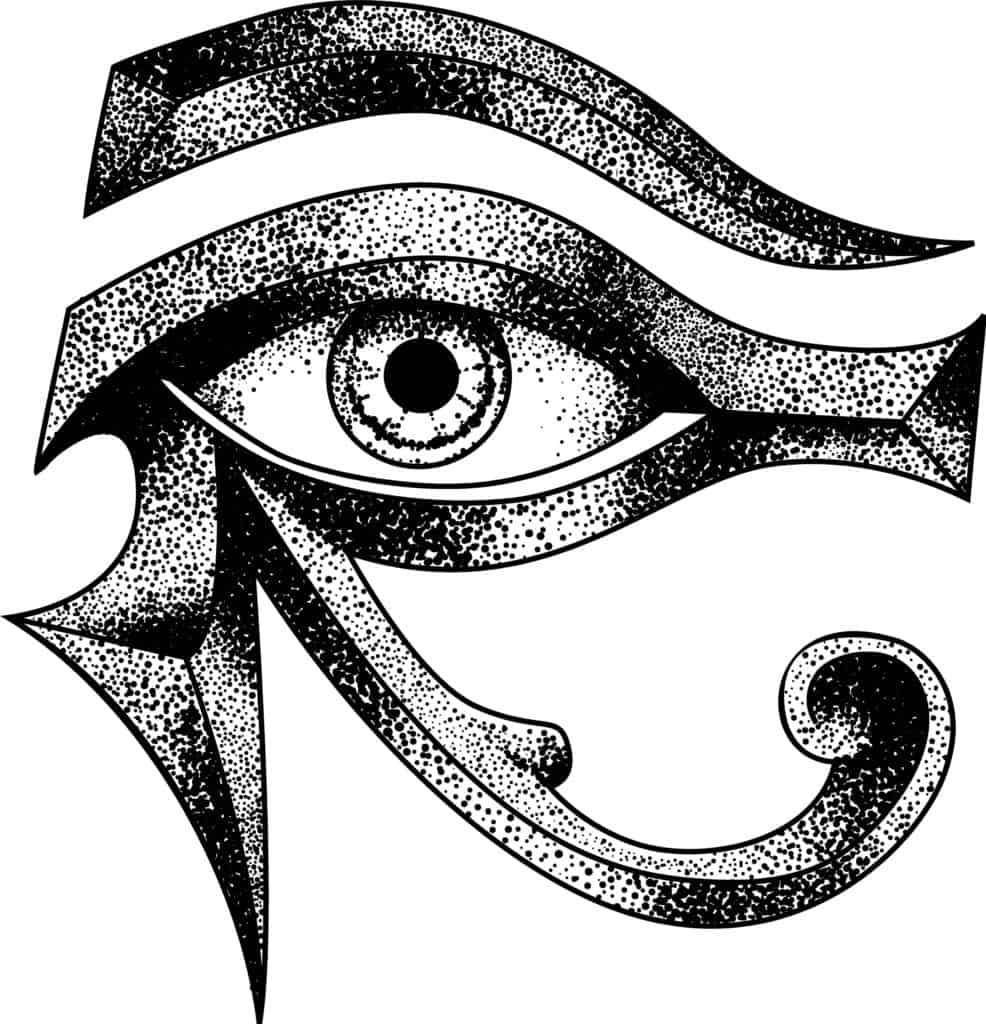 Eye of Horus by Blackstroke on Shutterstock

There are differences between the accounts regarding how Horus’s eye got fixed, too. While it is said to be restored magically in some of them, the other accounts say Hathor, the goddess of the sky, beauty, fertility, and women, who is said to be Horus’s consort, restored his eye.

A third story suggests that the God of wisdom, magic, and moon, Thoth, gave Horus his eye back.

It was also believed that the movements of the moon recounted the tale of Horus losing his left eye, which is said to be the moon itself.

The days where the sky has no moon supposedly represented the day when Horus lost his eye, and each day forth is considered to mark the healing period until the full moon, which marks the restoration of the eye.

Thanks to the myth regarding its origin, the Eye of Horus became a sacred Egyptian symbol representing sacrifice, protection, healing, and wholeness.

Ancient Egyptians carved the symbol on walls, amulets made of gold, silver, wood, and porcelain. They believed the symbol would bring health, prosperity, and protection to the wearer.

The symbol is also known as Wedjat eye, Wadjet, Wedjoyet, and Udjat, which translates to “intact, whole and healthy”.

According to the belief, the Eye of Horus was a magical symbol with immense powers. That is why the people of the time used it on amulets, funerary items and graves to ease the deceased’s journey into the underworld and protect them in the afterlife.

The meaning behind the Eye of Horus symbol varied depending on what legend the ancient Egyptians believed in.

Some used the symbol to represent the inevitable victory of good over evil. Others use the part where Hathor, Horus’s consort, healed the eye to express that the eye represents healing, health, and magic instead.

Another version of the myth suggests that after Set removed Horus’s eye out and tore it into six different pieces, the gods ordered Thoth, the God of wisdom, magic, and moon, to collect the pieces and heal the eye. The incident also is considered to be a representation of the victory of good over evil and the power of magic and healing.

That being said, the primary meaning associated with the eye of Horus is about the eye being used as a protection symbol.

The Eye of Horus as a Symbol of Protection

According to one of several myths regarding the Eye of Horus, Horus  ripped his eye out himself to protect his father and bring him back to life. That is one of the reasons why the Wadjet eye is considered a protection symbol.

On the other hand, Osiris was the ruler of all Egypt and the protector of the Pharaoh. Since Horus was a direct descendant/the son of the Pharaohs’ protector, he, too, could be considered a protector, making the Eye of Horus a symbol of protection.

The ancient Egyptians drew the symbol on walls, tombs, temples, gold, amulets, jewelry, papyrus, and even buried mummies with it to ensure their protection as they made the journey into the afterlife.

The Eye of Horus as a symbol of protection is its most commonly known use. It is one of the most sacred and renowned Egyptian symbols that people used to ward off evil spirits.

On an interesting side note, it is not only Egyptians who used the symbol for protection. Pagan people adopted and used the watchful eye for the same purpose.

The Eye of Horus symbol is more than just a documentation of a myth. Ancient Egyptians are known for their use of spiritual stories and legends to document discoveries through symbols.

The Eye of Horus is no different and represents mathematical fractions known as Heqat fractions. Remember how we mentioned in one version of the legend Set tore Horus’s eye into six different pieces?

Well, those six pieces are the six different Heqat fractions. The Heqat fractions form an ancient Egyptian measuring system. It was used to measure grains and flour and amounted to around 4.8 liters or a little over a gallon.

The Eye of Horus Symbol, the Human Brain and Neuroanatomy

The ingenuity of the Egyptians doesn’t stop with the Heqat fractions. The people of this civilization are considered pioneers of art and medicine, and their creativity surely knew no bounds.

When you take the Eye of Horus and map it onto an image of the brain’s sagittal plane, the six different parts correspond to brain parts representing six human sensoria.

If you take the Eye of Horus and place it on the midsagittal view of the human brain, each portion creates different portions of neuroanatomic human features. That is why the Eye of Horus is also called the Eye of the Mind.

The Wadjet eye is a symbol of how the ancient Egyptians possessed a vast, in-depth knowledge of the human anatomy, which is also backed by several ancient medicinal scrolls discovered.

The Eye of Horus, The Eye on the Dollar Bill/the Eye of Providence and Conspiracy Theories

Many conspiracy theorists believe that the Eye of Horus symbol used by the ancient Egyptians is the same as that on the dollar bill. That is a common misconception by many people as well.

However, the symbol on the dollar bill is the Eye of Providence, and its roots lie in Christian art and symbolism.

What further fuels the conspiracy is the fact the eye on the dollar rests over a pyramid, another major symbol of ancient Egypt.

Suggesting they are one and the same, conspiracy theorists also associate the Eye of Horus symbol and the Eye of Providence with the Illuminati and Freemasonry.

It is claimed that the Eye represents the illusion of power, manipulation, subordination, and control over information and knowledge. These theorists believe that it is the Illuminati, a group of powerful and elite individuals, who run the governments, making all the decisions.

However, the Eye of Providence represents the three Christian beliefs regarding the all-seeing eye of God.

A triangle encapsulates the eye, and the three corners of the triangle depict the Father, Son, and Holy Spirit of the Christian faith.

Although the Eye of Horus and one version of the Eye of Ra is quite similar in appearance, these are two different symbols.

You can read our post drawing a comparison between the two symbols here:

The Eye of Horus Vs. The Eye of Ra: A Comparison Between the Two Egyptian Symbols

Is the Eye of Horus the Left or the Right Eye?

The Eye of Horus is the left eye of the God Horus.

When superimposed on an image of the midsagittal brain, the inner corner of the Eye of Horus symbol corresponds to the part of the human brain called the pineal gland.

The pineal gland is associated with what is called the parietal eye (the third eye), an organ some reptile, amphibian and fish species have.

This parietal eye, also known as the pineal eye, is located on top of the head and has functions regarding the circadian rhythms, navigation, perception of light and controlling the body temperatures of the said species.

Some theosophists suggest that the humans also have a third eye located between the two hemispheres of the brain which became dormant as humans evolved and turned into the pineal gland.

According to some of these theories, the human third eye had the ability of microscopic and telescopic vision while some suggested it also had spiritual functions.

To see the relation between the Eye of Horus and the pineal gland clearly, one simply needs to place/superimpose an Eye of Horus symbol onto an image of the midsagittal human brain.

We hope you liked our post about the Eye of Horus and its meaning. If you did, please check out our detailed article on ancient symbols here . Thanks for reading!

The Eye of Horus, Its Meaning, Symbolism and Origin

The Eye of Horus Meaning and Origin, The Egyptian Symbol of Protection Explained – SymbolsAndMeanings.Net, February 1, 2021