The Chi-Rho was a symbol of significant importance for Christians, especially in the early times. But was it originally a Christian symbol? If not, how did it transform into one? Where did it originate from? We are here to answer these questions and many more. Just read on.

How To Pronounce Chi-rho?

First things first. Before we get into the origin story, meaning and uses of the Chi-Rho, which happens to be one of the most important religious symbols, let’s learn how to pronounce it.

It is simply pronounced as “KEE-roe” in English.

How Was “☧”, The Chi-Rho Symbol Created?

The Chi-Rho symbol (☧) simply is the superimposition of two Greek letters onto each other; Χ (Chi) and Ρ (Rho).

These two letters were not selected randomly though, they are taken from the Greek word ΧΡΙΣΤΟΣ (Christos) meaning “the one who is anointed”.

(‘To superimpose’ means ‘placing or laying one thing over another’)

Where Did The Chi-Rho Monogram Originate and When Was It First Used?

Although it is mostly known as a Christian symbol, the Chi-Rho monogram existed before Christianity.

It was inscribed on the coins of Ptolemy III Euergetes who ruled the Ptolemaic Dynasty in Egypt between the years of 246 and 222 BC.

That, however, was not the only non-Christian use of the Chi-Rho symbol. It is known that Greek scribes of pagan faith used the symbol to mark passages in texts they consider important. In that sense, the symbol was just an abbreviation of the Greek word anglicized as ‘Chreston’ meaning “good”.

The story of how the symbol came to be a common Christian symbol dates back to the 4th century, to the Battle of Milvian Bridge on October 28, 312, to be exact. 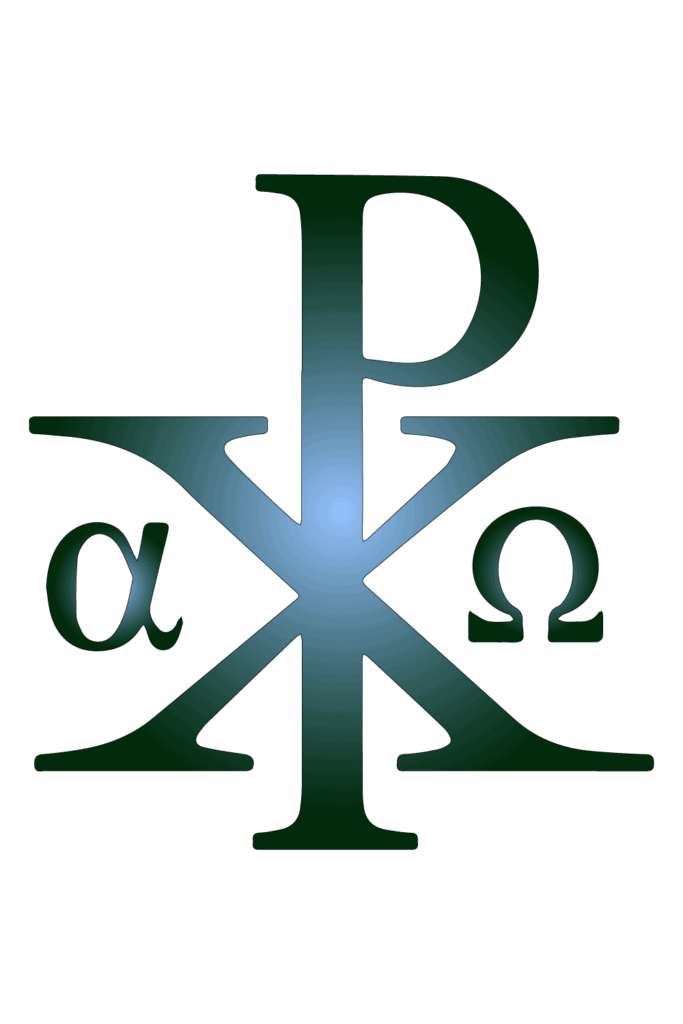 This was a battle between the armies of two Roman emperors, Maxentius and Constantine I, which ended with the victory of the latter.

Both Lactantius, Constantine’s advisor on Christianity-related matters, and Eusebius of Caesarea in his work named Vita Constantini (The Life of Constantine), wrote that the Chi-Rho symbol was adopted by the Roman emperor after a vision he had.

According to the story, after seeing the bitter fates of many commanders who worshipped several different gods, the emperor decided to pray for and asked the help of the One Supreme God.

After noon, Constantine saw a sign imposed on the sun (although some accounts say that the sign was ‘above the sun’) along with a message that said in Greek “With this symbol, you will conquer”. It is said that Constantine’s army also witnessed this miracle.

On that same night, Christ appeared to Constantine in his dream and told him to use this sign as a defense against his enemies.

Constantine had the Chi-Rho symbol drawn up on the shields of his men and ended up winning the battle. He believed it happened thanks to the help of Jesus Christ through this symbol.

Constantine also used the symbol on his labarum, one of his vexillums (military standards).

Several years later, he declared Christianity a legal faith in the Roman Empire. So, it would be fair to say that the miraculous appearance of the Chi-Rho and the Battle of Milvian Bridge was a turning point for Christianity becoming a widespread religion.

The Vision of the Cross painted by Raphael and his students depicts the scene of the vision with the words “Εν τούτῳ νίκα” (With this symbol, you will conquer) along with a cross (yes, not the Chi-Rho in this particular artwork) in the sky appearing to Constantine and his army.

You can check this masterpiece by clicking right here

Although it predates Jesus Christ and Christianity, currently the Chi-Rho symbol is mainly used to represent Christ.

It is actually one of the oldest Christograms. A Christogram is a symbol created by combining letters that are the abbreviated representation of the name of Jesus Christ.

In the case of the Chi-Rho, which is also sometimes called the ‘px Christian symbol’ and ‘Constantine symbol’, these letters comprising the Christogram are ‘Chi’ and ‘Rho’ in the Greek alphabet, that is to say, the first two letters of the word ‘Christos’.

As we mentioned above, pagan Greek scribes also used the symbol to mark certain parts of a text and underline the importance of those parts.

However, regarding the other pre-Christian use of the symbol, there is no record mentioning why Ptolemy III Euergetes used it on some of his coins.

Is The Chi-Rho Symbol Catholic or Protestant?

The Chi-Rho symbol’s adoption by Christians goes back to the 4th century, to the times of the Roman Empire. So, it is safe to say that the Chi-Rho does not exclusively belong to the Catholic or Protestant Churches.

That said, although the symbol can be seen in some Protestant Church buildings today, it is more frequently used by Catholics.

The Chi-Rho is mostly considered a religious symbol. So, if you see someone wearing a Chi-Rho/Px tattoo, it is probably they want to represent their faith.

This wraps up our post on the Chi-Rho symbol, its meaning, uses and origin story. If you enjoyed reading it, you’d probably like our other posts on the ancient symbols here, do not forget to check them out.