You have probably read our extensive post about Celtic symbols and their meanings here. Today, we will be examining one of the most important Celtic symbols, the Triskelion, also known as the Triskele, its meaning and origins. 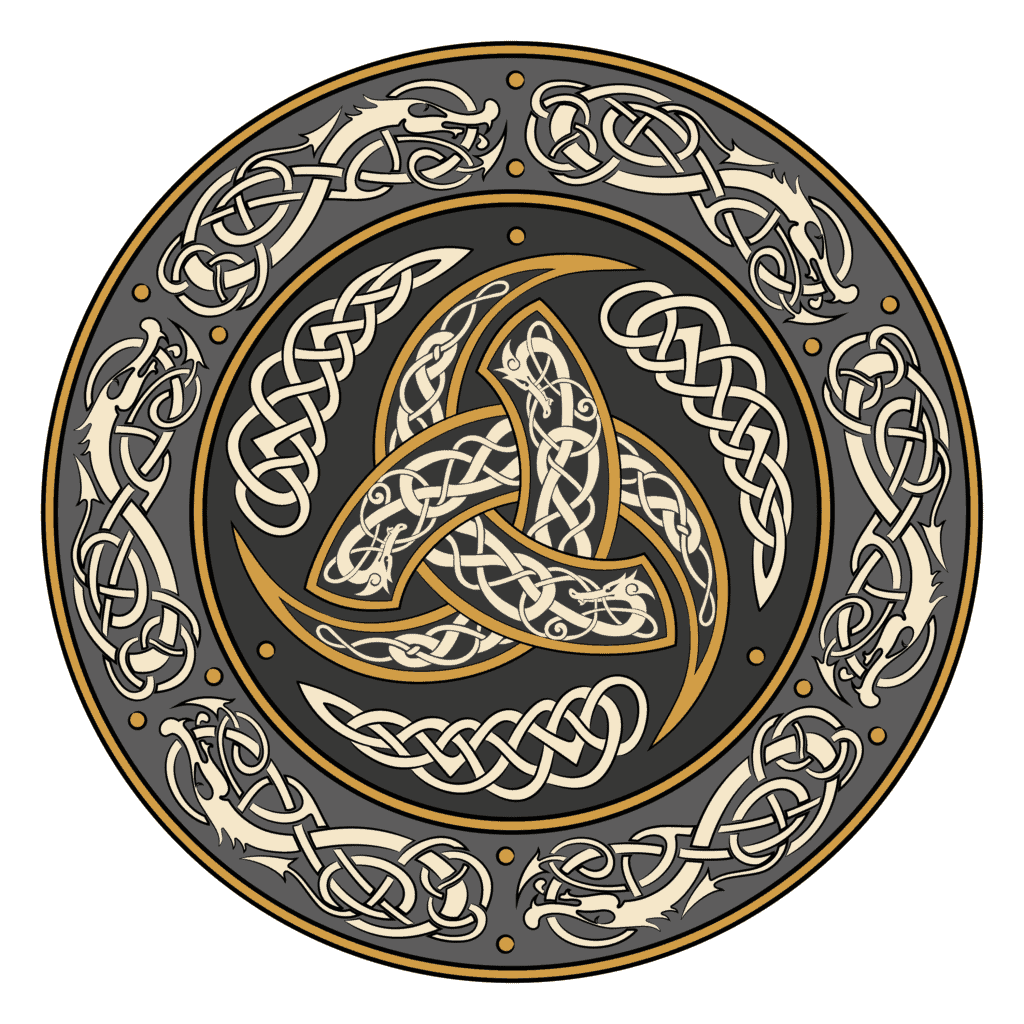 Triskele/Triskelion, the Celtic Symbol by Bourbon-88 on Shutterstock

The Origins of the Celtic Symbol Triskelion / Triskele

The Triskelion, also called the Triskele or simply the Celtic spiral, is one of the ancient Celtic symbols that didn’t lose its significance over the centuries. Today, we can see this ancient design being used in many forms of artwork, including jewelry and tattoos.

The Triskelion’s design consists of a triple spiral that shows rotational symmetry, which in biology is also known as radial symmetry.

In general, the Triskele’s spiral design is linked to interlocking Archimedean spirals. It is also thought to represent three bent human legs.

Both the terms Triskelion and Triskele are of Greek origin, with “tri” meaning “three and “skelos” meaning legs. Based on this, both terms literally mean “three-legged”.

The Triskelion is considered to be one of the oldest Celtic symbols. It is believed to have been used as early as the Neolithic era, as evidenced in its presence on the entrance stone of Newgrange, a prehistoric monument in Ireland.

The Meanings Behind the Triskelion / Triskele

The Triskelion, despite its seemingly simple design, is actually one of the most complex ancient Celtic symbols in terms of meaning. This is because many concepts have been linked to it and many cultures have used it.

Triskele, the Celtic Spiral by Art_of_Sun on Shutterstock

One of the popular interpretations of the symbol is that it represents motion, with its three arms designed to look like they are all moving outward from the center. Motion and movement are believed by some symbolists to signify energies, progress, cycles, competition, and revolution.

Another reason that makes the Triskelion a complex symbol is the three arms (or legs) themselves. Their meaning has been interpreted differently across eras, cultures, and mythologies, giving the symbol different meanings.

For instance, the Triskele’s arms have been thought to represent the stages or cycles of life: life, death, and rebirth. It is also linked to the elements of life: spirit, mind, and body.

Some also believe it represents the units of the family: father, mother, and children. It may also signify time, as in past, present, and future.

Meanwhile, the Triskelion is also connected with power, intellect, and love, as well as creation, preservation, and destruction.

The Triskele may have also represented the three Celtic worlds: the present world, the spiritual world, and the celestial world.

All in all, the Triskelion is just one of the Celtic symbols that represent the ancient Celtic belief that anything that matters in this life and world comes in threes. In this regard, the Triskelion has been closely linked and compared to the Triquetra, also known as the Trinity Knot.

The Triskelion or Triskele’s Use in the Ancient Times

The Triskelion appears in many pieces of evidence and items from ancient cultures. One of the earliest recorded is its presence in Malta, dating as early as 4400-3600 BC.

As mentioned above, the Triskele is engraved on the megalithic entrance stone in Newgrange, which was built around 3200 BC. Mycenean vessels, Lycian coins, and staters from Pamphylia and Pisidia, also exhibit the use of the Triskelion. 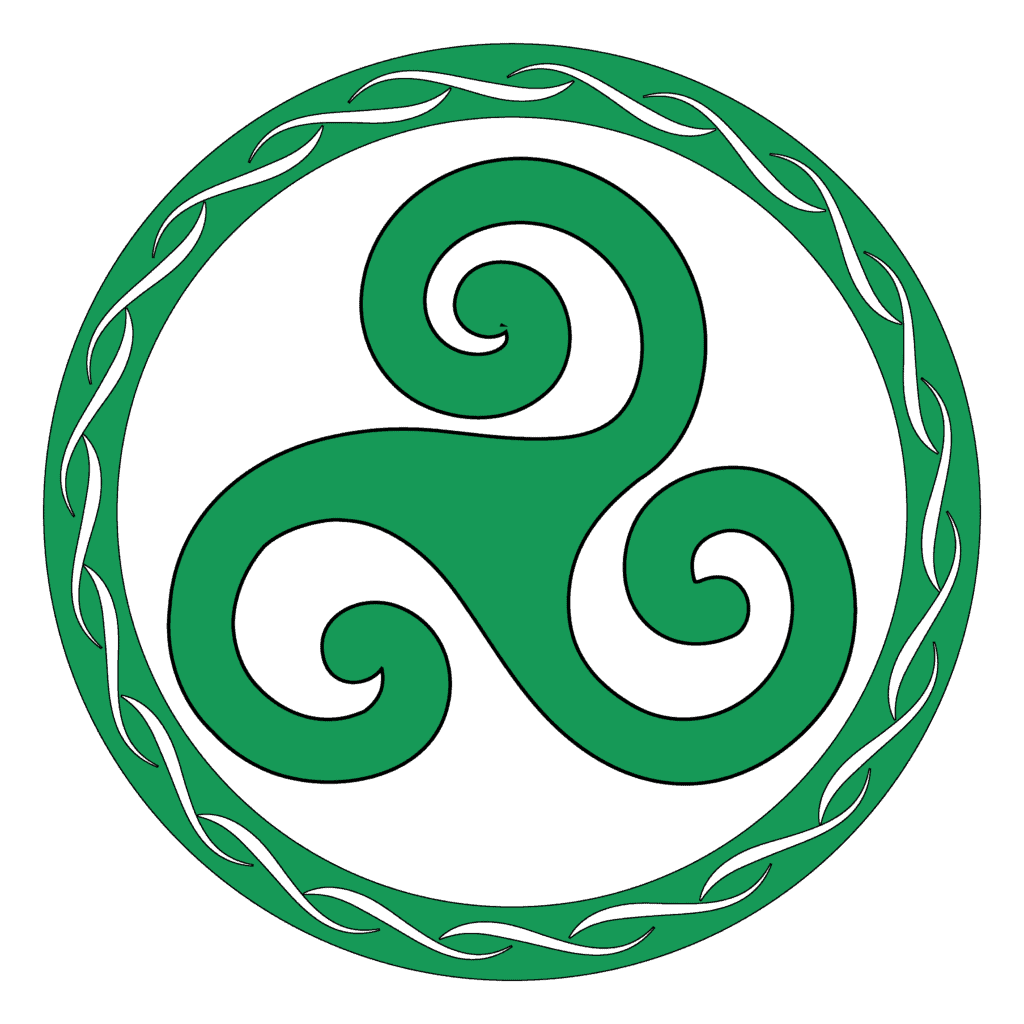 Triskele, the Celtic Triple Spiral by Biljanacvetanovic on Creative Fabrica

Some artifacts from Egypt dated as early as 1400-1350 BC also bear the Triskelion.

A variation of the Triskelion, with the head of the Gorgon, was used as the symbol of Sicily. The Sicilian variation was officially called the Trinacria.

It is also believed that although the Triskelion is generally accepted as one of the Celtic symbols, it may have been a pre-Celtic symbol, considering its existence in pre-Celtic era items. Newgrange, for one, was built around 3200 BC, predating the Celtic arrival in Ireland.

Probably the reason why the Triskelion came to be linked to the Celtic culture is its appearance. Because of its three arms, it was attributed to the Celts’ belief in the “threes” concept.

Ultimately, when Christianity spread throughout Europe and eventually in Ireland, the Triskelion was associated with a new meaning. It came to represent the Christian Trinity: The Father, Son, and Holy Spirit.

As such, it also became a symbol of eternal life. Since then, the Triskelion has become an important symbol among Christians of Celtic descent all over the world.

Churches across Europe that have been designed during the Medieval times bear stylized Triskelions, as used to design their windows.

The Triskelion / Triskele in the Modern World

In the modern age, the Triskelion and its variations are used in various manners by different groups, particularly neopagans and polytheistic reconstructionists.

As a Celtic symbol, the Triskelion is used by groups with Celtic cultural identification and origins. Primarily, the spiral Triskele is one of the main symbols used by the Celtic Reconstructionist Paganism.

Celtic Reconstructionists utilize the symbol to represent various comic and theologic concepts. In general, the Triskelion is one of their favored symbols because of its association with Manannán mac Lir, an Irish mythology god believed to be the king of the Otherworld.

The Triskelion in Pop Culture

It is possible that you are familiar with the Triskelion because of its adaptation to pop culture.

While its cousin, the Triquetra, was further popularized by the TV series Charmed, the Triskelion is used as a prominent symbol in the TV series Teen Wolf. The series draws heavily from Celtic mythology.

Meanwhile, another TV series, Merlin, used the Triskelion as the symbol of the druids, which are Celtic magicians, priests, and soothsayers.

It is also considered that the number three and its importance have been used in various ways throughout history, literature, and culture. Even some children’s bedtime stories exhibit it.

For instance, the Three Little Pigs and Goldilocks and the Three Bears clearly exhibits the significance of the “three”.

Today, the Triskelion is also widely used as a design popular in jewelry and accessory production. You can get pendants, charms, earrings, and brooches bearing the design.

The Triskelion is also one of the Celtic symbols popular among tattoo enthusiasts.

Somehow, knowing the possible meanings behind the Triskelion symbol will make using it today more significant, as you can use it to exhibit your personal beliefs, whether it is based on Christian or Celtic religion and culture.

Celtic TriskelionTriskele, Its Meaning and Origin