Aztec society, composed of several ethnic groups, three city states, and a strong military and religious background, was among the most important between the 14th and 16th centuries. Aztec symbols and meanings are deeply rooted in cultural and religious symbolism, and they still hold sway over believers in central Mexico and around the world today.

Much like Inca, Maya, and a host of other Mesoamerican civilizations, allegories, symbolism, and metaphors were integral parts of the day-to-day lives of the Aztecs. Whether the symbol in question was religious or naturalistic, it held deep meaning to the individual who believed in it.

As you can imagine, in a society so deeply governed by symbolism, there are quite a number of these symbols, all noteworthy. However, today, we will focus on some of the most important and common Aztec symbols and meanings.

The eagle is one of the most important symbols in Aztec culture. Not only because it represented certain revered qualities like power, fearlessness, and bravery but also because it stood for more than just one thing.

The Eagle is famously known as the symbol of Tenochtitlan, the Aztec capital. The Aztecs believed that they came from the Mexica people, a wandering tribe that is believed to have made its way across Mesoamerica looking for a home that would be identified by an eagle patched on a cactus.

They believed the eagle to be the reincarnated god, Huitzilopochtli. The Aztecs eventually came across an eagle patched on a cactus in the middle of Lake Texcoco. They established their capital city, Tenochtitlan, on this swampy island.

The eagle was also associated with the following:

The eagle eventually became part of the Mexican flag after its 19th-century revolution and liberation.

2. The Feathered Serpent – A Symbol of the God Quetzalcoatl 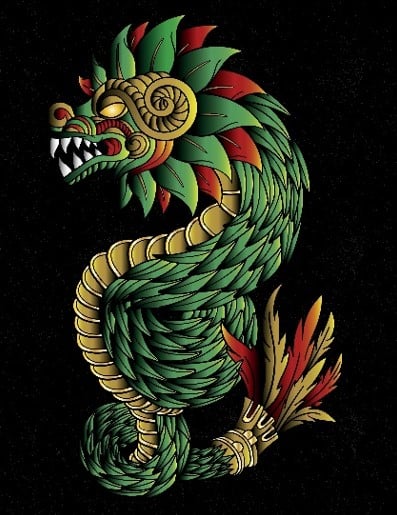 There were many gods in the Aztec culture, all of whom were okay with human sacrifice except Quetzalcoatl. That’s why, despite not being a god of war, most warriors wanted to be associated with him.

Quetzalcoatl was often depicted as a man, the sun, or a feathered serpent, technically a feathered amphiptere dragon with no other limbs except his two wings.

Most warriors attached feathers and carved serpents on their weapons as a tribute to Quetzalcoatl and to symbolize the power and strength of the Feathered Serpent.

3. The Butterfly – The Symbol of Transformation and Change

Called papalotl by the Aztec people, the butterfly was an aspect of the god of vegetation, Xochipilli. The symbolic meaning is simple: as the butterfly evolves from a simple egg to a larva, a pupa, and finally, a full-fledged beautiful butterfly, so does personal change and transformation.

The butterfly, however, had a second symbolic meaning associated with the Aztec goddess Itzpapalotl. Itzpapalotl directly translates to “clawed butterfly” or “obsidian butterfly.”

4. The Jaguar – A Symbol of Military Prowess, Skill and Strength 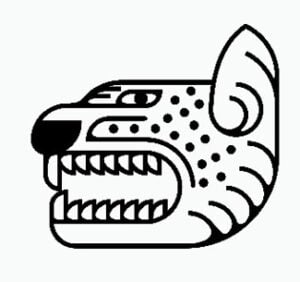 As the biggest cat in Mesoamerican jungles, the jaguar is fierce, cunning, ruthless, and efficient in its hunting; it is at the top of the food chain.

It’s, therefore, no surprise that the most elite warrior caste adopted the jaguar in Aztec society—the Jaguar Warriors.

The military caste comprised only the strongest, most skilled, and most battle-hardened warriors. The Jaguar was also the Aztec military seal.

5. Blood – A Symbol of Power and Life

The relationship between ancient cultures and blood has always been complicated. Very few, more so than it was with the Aztecs. Like most cultures, the Aztecs believed that blood symbolized vitality and life. They also believed that the substance kept the sun in the sky.

In Aztec culture, the sun was believed to weaken as it traveled across the sky. By dusk, the sun was so weak that it had to travel the underworld at night and hopefully re-emerge the next morning. To give the sun the energy to do so, the Aztecs believed that it needed blood. As such, human sacrifice was necessary.

Strangely enough, the Aztecs also believed that the sun was an incarnation of the beloved Aztec god, Quetzalcoatl (he of the Feathered Serpent). Ironically enough, Quetzalcoatl was the only deity opposed to human sacrifice, yet the Aztecs persisted with this practice because they needed to keep the sun (Quetzalcoatl) strong.

6. Footprints – A Symbol of the Passage of Time or One’s Journey

In Aztec writing, footprints were mostly used to symbolize one’s journey through life or the passage of time. This Aztec symbolism was most popular in visual storytelling.

7. Frog – A Symbol of Fertility, Renewal and Joy

In Aztec civilization and symbolism, most animal symbols were portrayed in a frightening manner, even the frog.

Used primarily as a symbol for Tlaltecuhti, the Aztec Earth Mother Goddess was often portrayed with a fanged mouth and clawed feet with human skulls underfoot. This was designed to show her life cycle: swallowing souls and giving birth to new life—renewal.

Frogs were also used as a symbol of joy. The reasons for this aren’t clear, but it can be assumed that it’s because the Aztec civilization found frogs amusing.

8. Atlatl (Spear Thrower) – The Symbol for Dominance and Warfare

The spear, in general, was a very useful weapon in Mesoamerican culture. The Atlatl—spear thrower—was unique to the Aztecs. It was a powerful weapon that predated even the bow and arrow.

The Atlatl (spear-thrower) warrior was also often used as a symbol of death.

9. Tecpatl (Stone Knife) – The Symbol for Human Sacrifice and Origin

As one of their deadliest and most useful weapons, the Tecpatl (Stone Knife), a lance-shaped, double-edged blade with a rather elongated tip, represented human sacrifice, trials, and tribulation.

10. Chocolate – The Symbol for Sensuality and Decadence

In the Aztec empire, chocolate was a revered commodity. So much so that it was mostly reserved for the elite, such as the Aztec Emperor and the ruling class. Chocolate was considered a powerful aphrodisiac by the Aztecs and Mayans. In many central American cultures, chocolate was even considered holy.

As a preserve for the elite members of society and an aphrodisiac, chocolate was also closely associated with more decadence.

For example, their warriors (divided into different castes) wore clothing that was designed after specific animals and gods, and they also tattooed their heads and entire bodies with a host of animalistic and religious symbols representing ferocity, power, strength, and fearlessness.