Being one of the most interesting and alluring subjects for the curious minds among us since the ancient times, the discipline of alchemy certainly had its impact on the human history.  But how did the alchemists practice it? What did they use ? In today’s post, we are deciphering the language of alchemists by bringing you the extensive list of alchemy symbols along with their meanings and uses. Let us not keep you waiting then, here is all the elemental symbols used in alchemy.

Let us start with one of the most significant symbols in alchemy, the ultimate goal of every alchemist, the philosopher’s stone.

The philosophers’ stone is a legendary substance in alchemy that can turn base metals into silver or gold. It is believed that, through the processes of chrysopoeia or argyropeia, this substance can transform a base metal like lead into gold or silver, respectively. 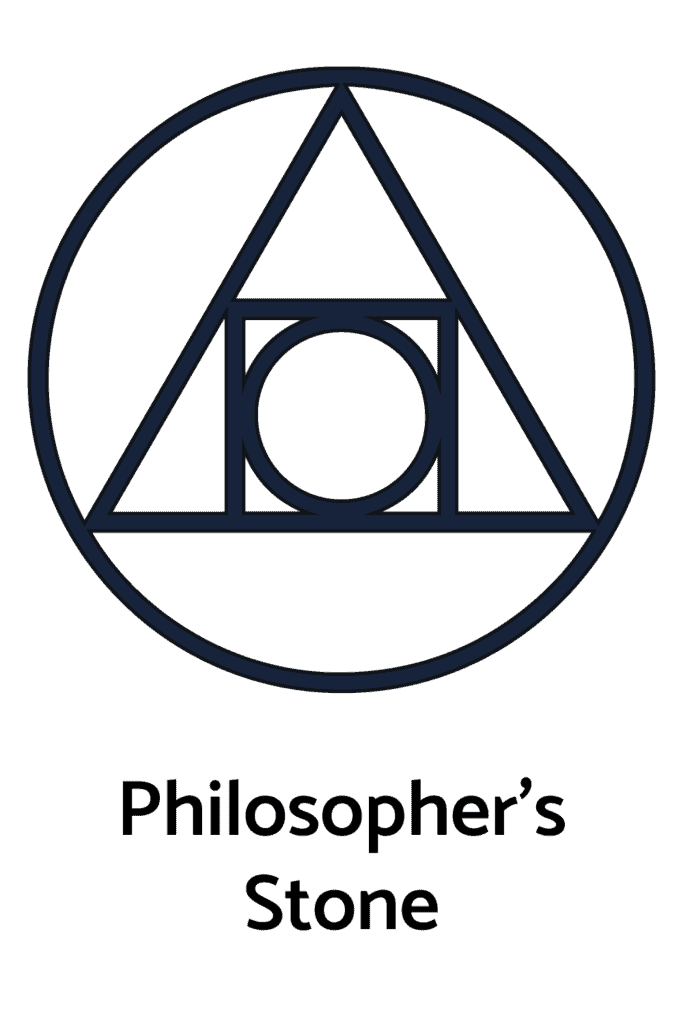 It was also closely associated by alchemists with the elixir of life, a liquid that was believed to rejuvenate its user, bring them youth and even grant them immortality. Alchemists believed that this elixir could be made of the philosopher’s stone.

Creating the philosopher’s stone is the magnum opus, the Great Work and the ultimate goal of every alchemist. That is why it is a central element in alchemical symbolism.

The philosopher’s stone is represented with the symbol known as ‘the squared circle’, which contains the four classical elements within according to some hermeticists. Here is how it looks like:

The ancient Greeks believed everything in the universe was made of four basic elements; fire, water, earth and air. Also called, the four classical elements and the four elements of matter, the symbols representing these elements were commonly used in alchemy. Let’s get right into it then.

The alchemical element of fire is represented by an upward triangle in alchemy. 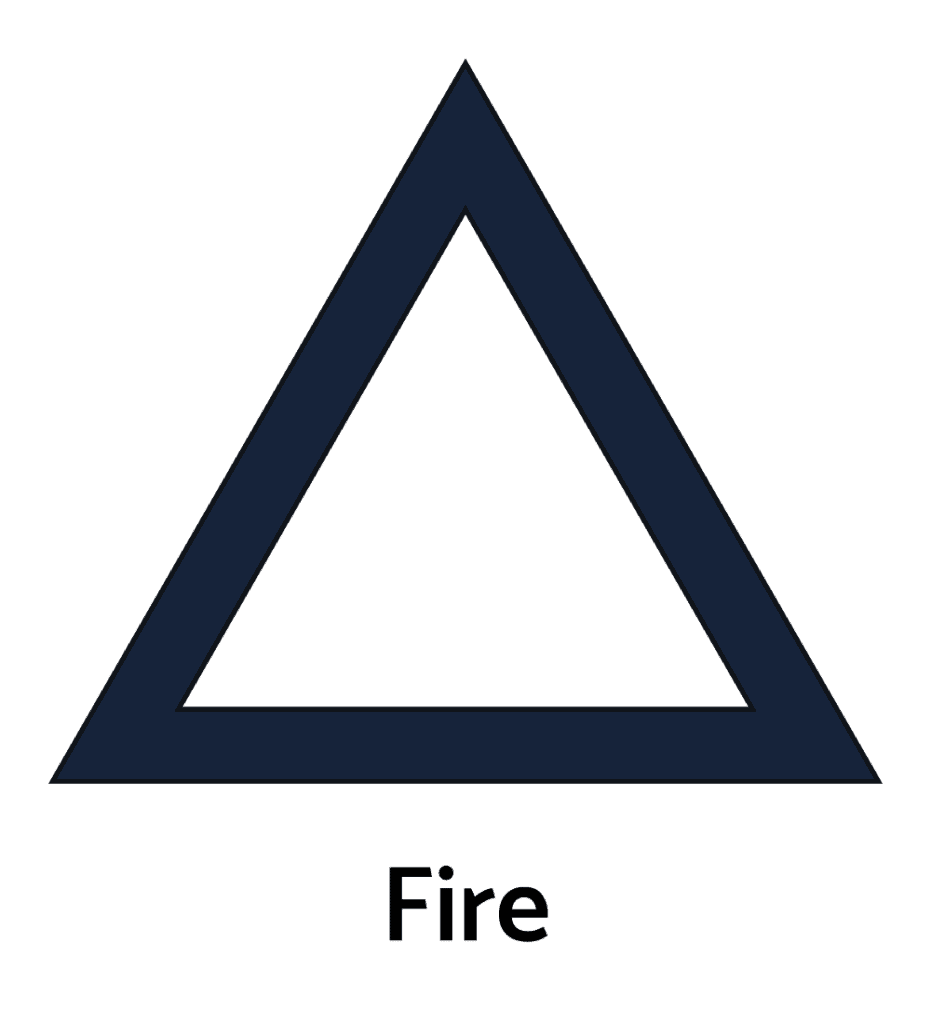 It is associated with masculinity, fiery emotions like anger and love and naturally, warm colors like orange and red. It is a hot and dry element according to Aristotle’s classification of these four basic elements.

Being the opposite of the alchemical fire element, water is represented with a downward-looking triangle. 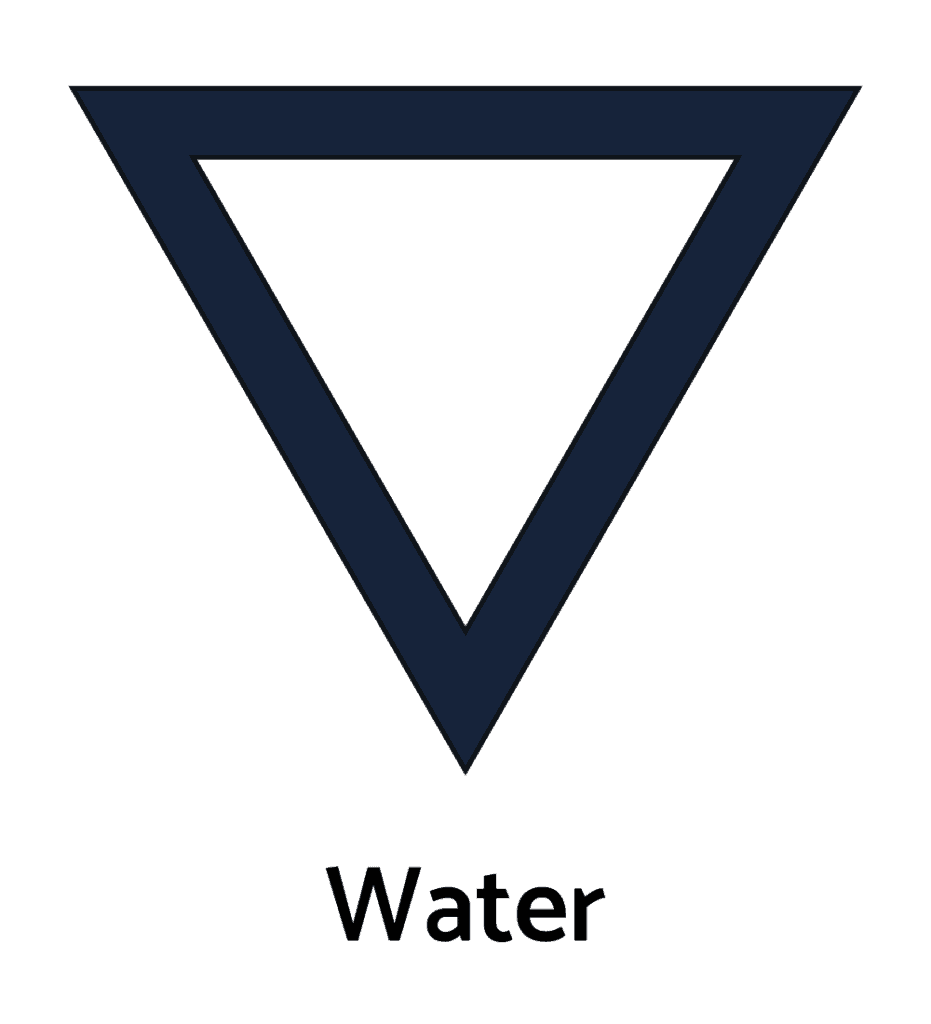 Classified as a cold and wet element by Aristotle, water is associated with femininity and befittingly, the color blue.

The alchemical earth element is associated with physical movements and the colors brown and green, that is to say, quite literally the colors of the earth. The alchemy symbol for the Greek basic element of earth is a downward triangle with a horizontal line crossing through it near the bottom part. 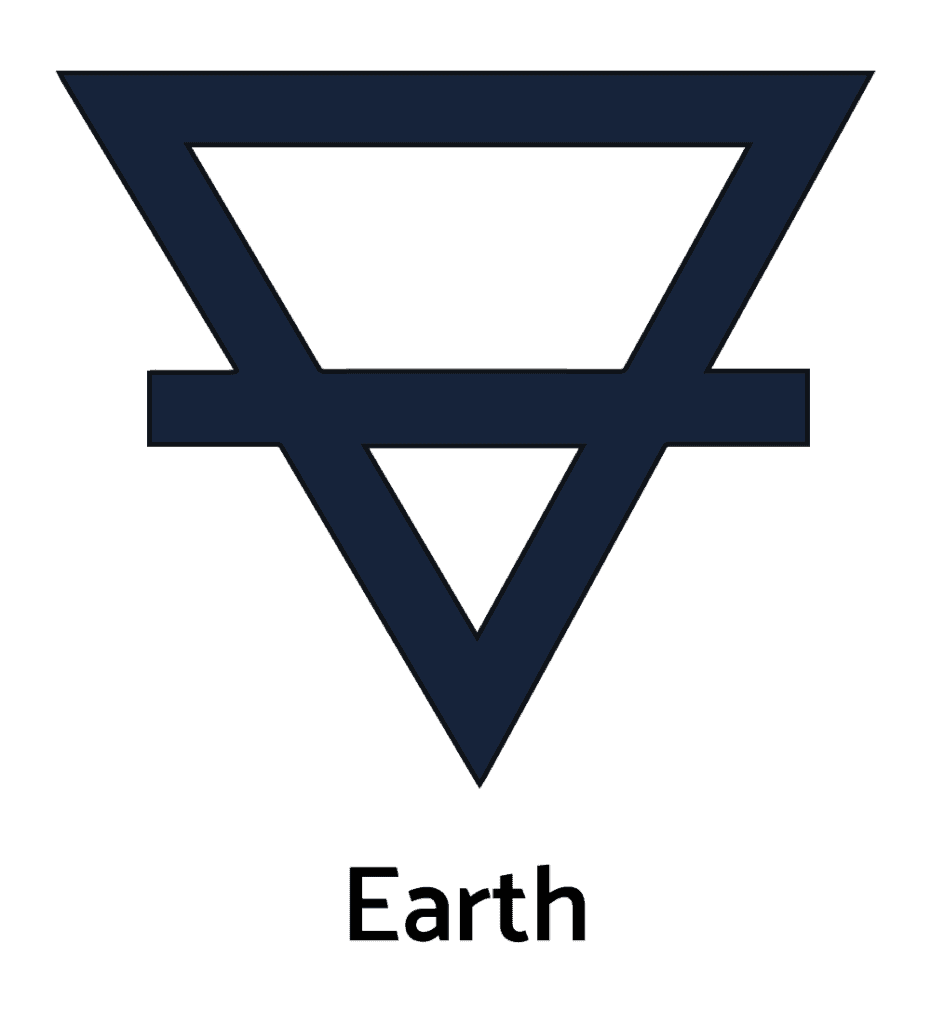 The earth was classified as a cold and dry element by Aristotle.

The alchemical opposite of earth in Greek classification of elements of matter is air. The alchemical air symbol is also the exact opposite of the one representing earth. It is an upward-looking triangle with a horizontal line crossing through it near the top part. 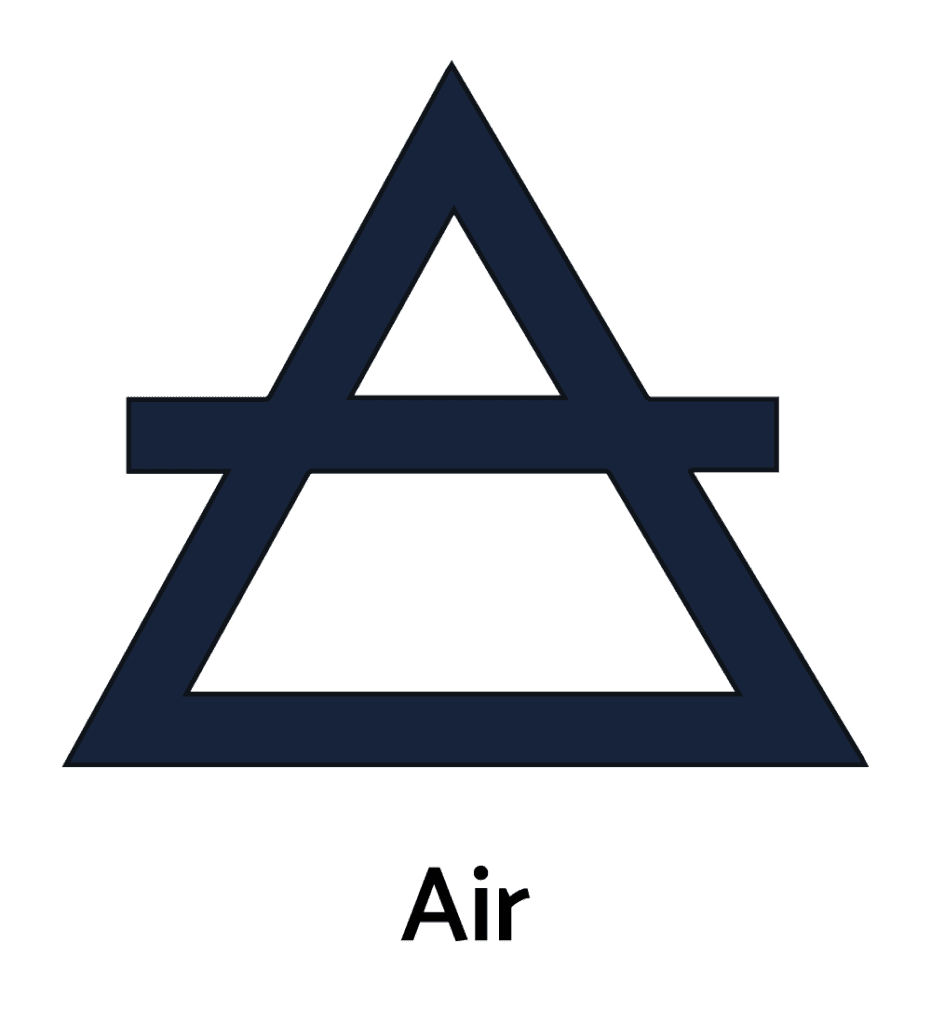 Aristotle classified the air element as hot and wet. Air is associated with life-giving forces, like the breaths, and the colors white, grey and blue.

Greek philosophers and alchemists were not the only people with theories on the nature of all beings involving their own set of alchemical elements.

Paracelsus, a renowned Swiss alchemist, physician and philosopher who lived in the 15th and 16th centuries, suggested that all seven metals are made of ‘the three prime elements’, namely, sulphur, mercury and salt.

Here are the alchemical symbols representing the three primes of Paracelsus.

Sulfur in alchemy is represented with two different symbols. The first one is the common sulfur symbol comprised of a triangle with a cross below (one that has arms of equal length, mind you) 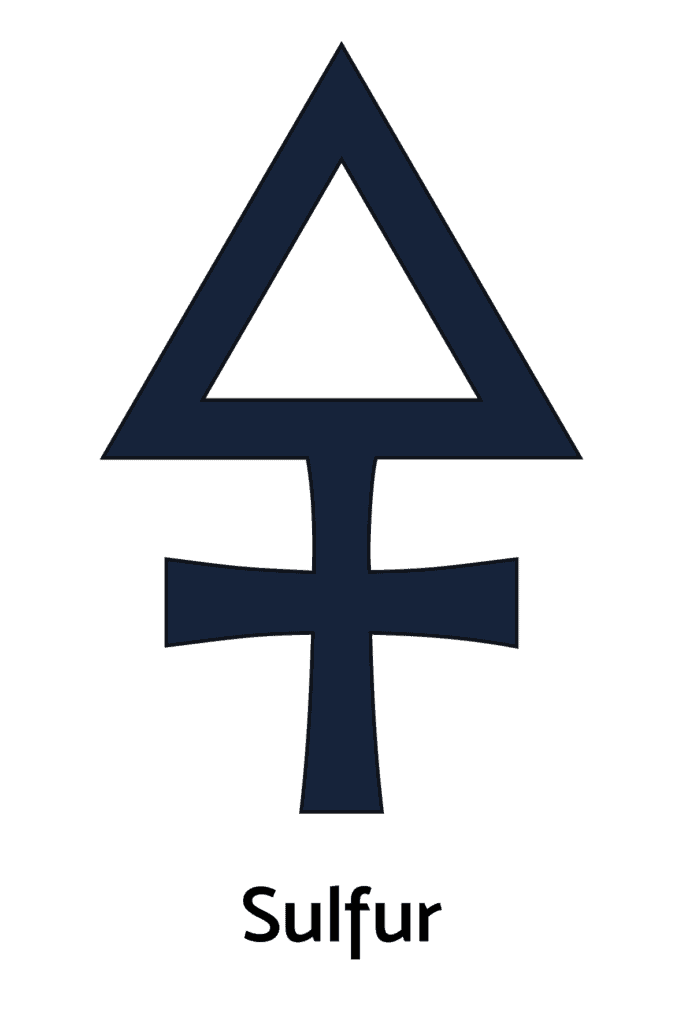 The second symbol for sulfur/sulphur is what we know today as the Leviathan cross/Satanic cross. There is no clear information as to how the symbol came to be used as the symbol for Satanic faith but this symbol has been being used for alchemy long before its adoption by satanists in the 20th century.

It features a patriarchal cross on top of an infinity symbol/ouroboros. 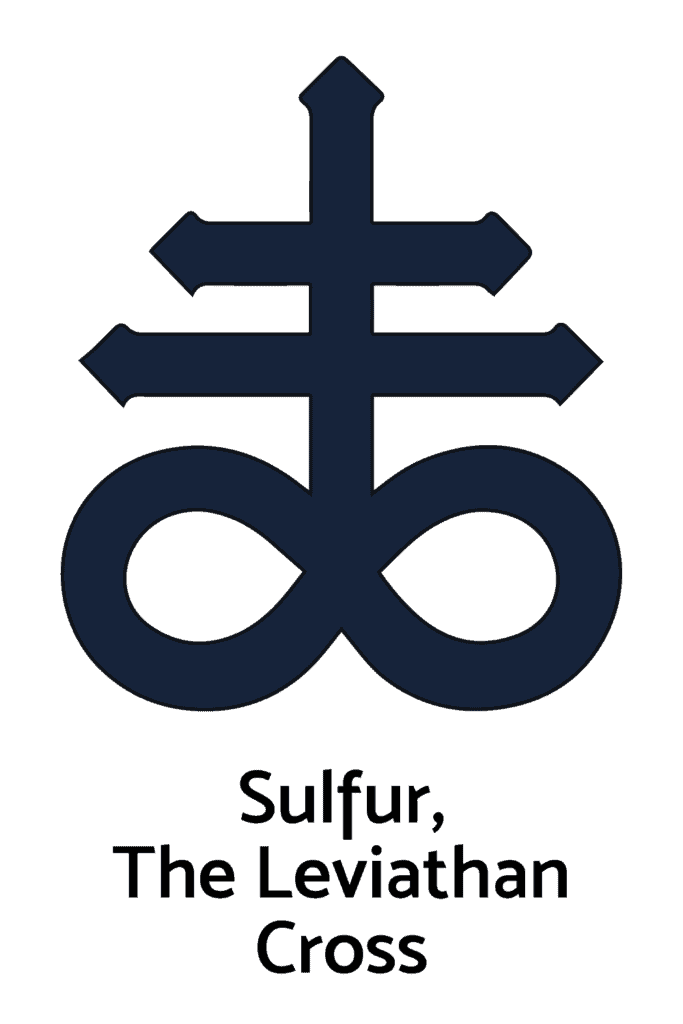 The second of the Three Primes, Mercury is represented with a symbol made of ‘the female symbol’ with a ‘c’ letter laying on its left side, resembling horns looking upwards.

The third prime element of Paracelsus, salt, is represented with a circle that has a horizontal line going through it in the middle. 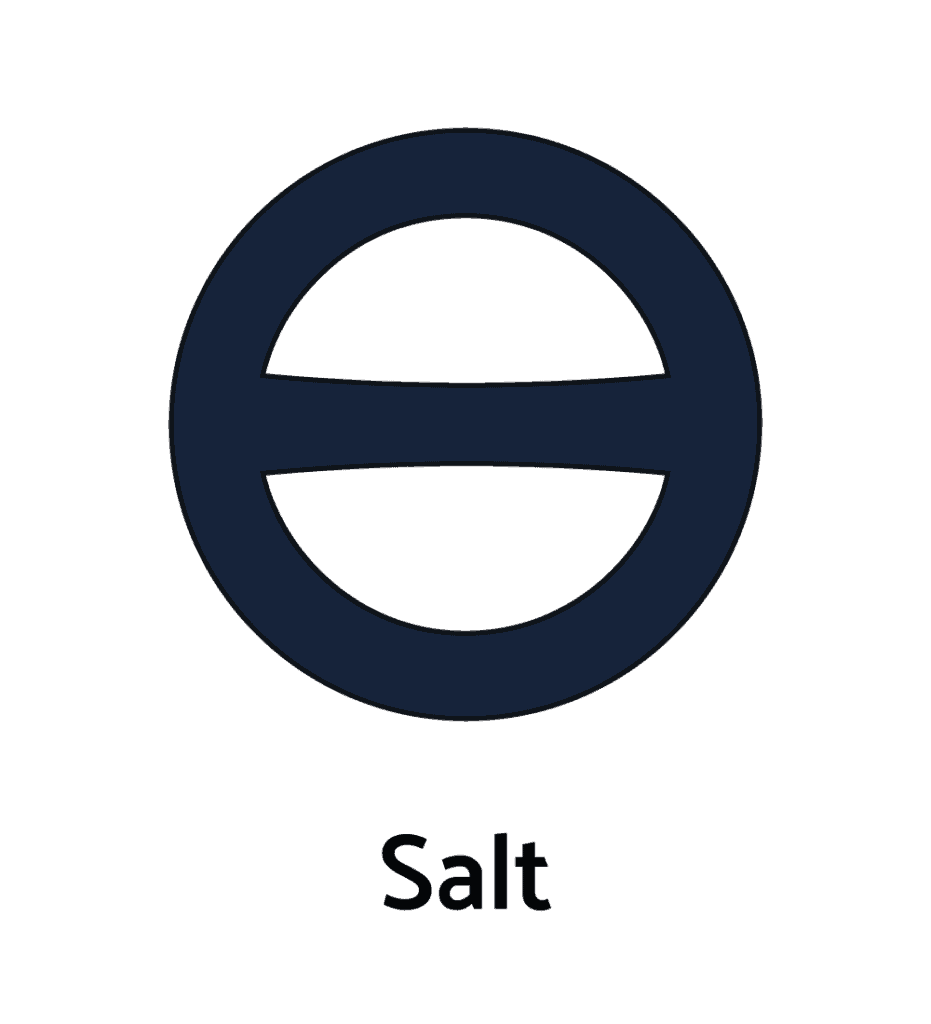 Other Alchemical And Elemental Symbols

Led, iron, tin, copper, silver, gold and mercury are the seven planetary metals that are closely associated with the seven classical planets, also known as the seven sacred luminaries and the seven wandering stars in classical antiquity, the names given to the seven moving astronomical objects that were visible to the naked eye.

These classical planets and the deities associated with them were featured quite often in alchemical symbolism and although some of the seven metals had their own symbols, their planetary symbols were used more often in alchemy.

Lead is associated with the planet Saturn and it is one of those alchemical metals that has two symbols. The first one, which is also the symbol of Saturn, is as follows: 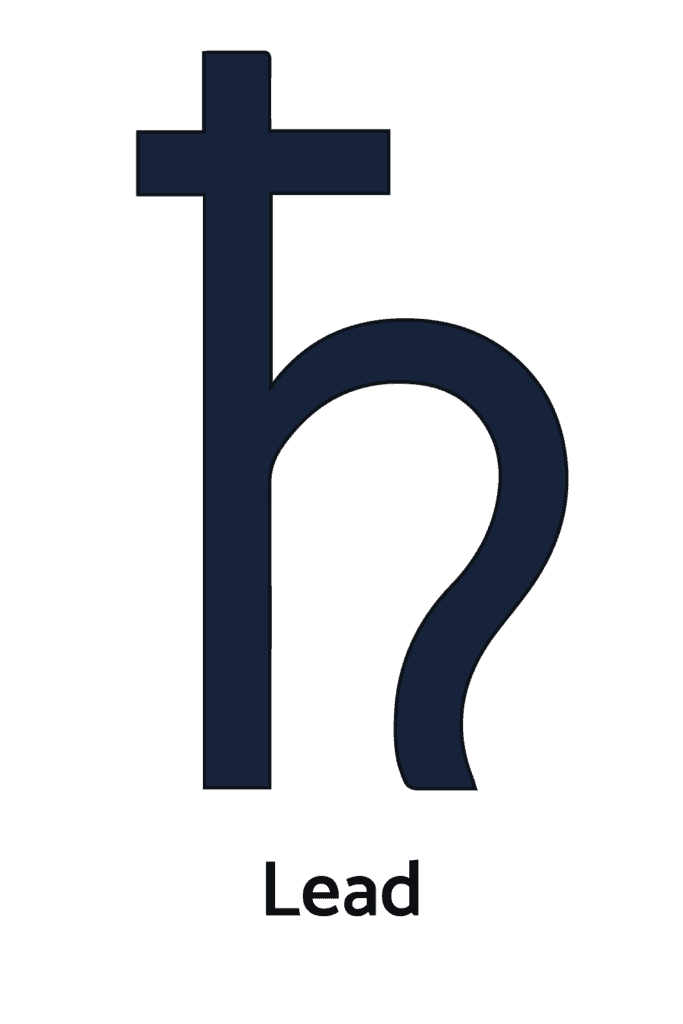 And here is the second lead alchemical symbol: 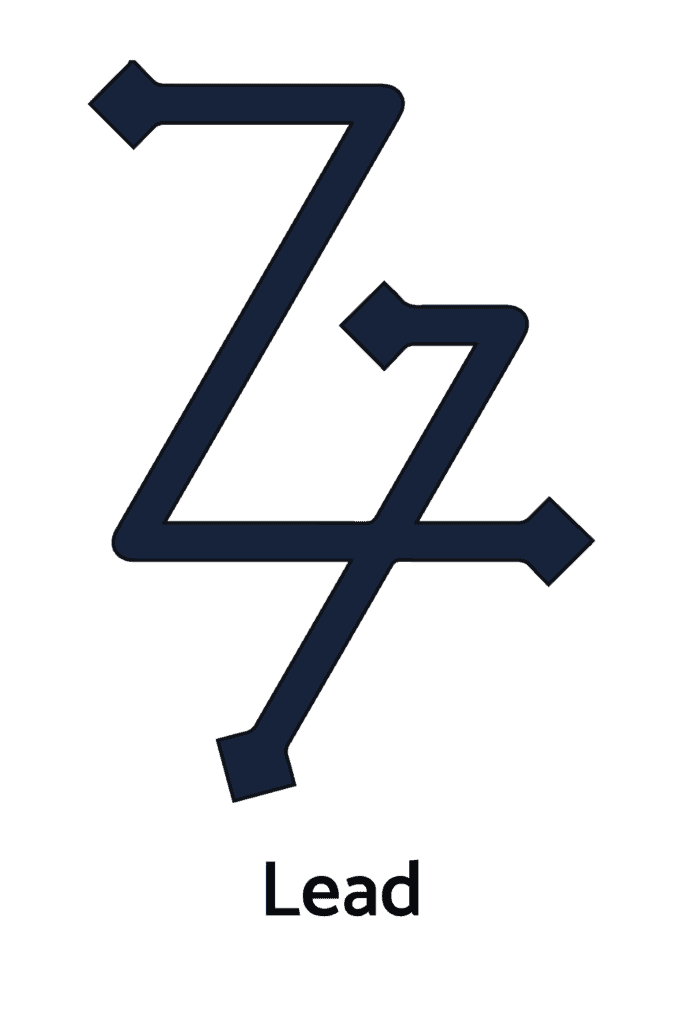 Mercury, also known as quicksilver, is associated with the planet … Mercury (I can literally see the shock on your faces right now). Its symbol is the same with the mercury element of the Paracelsus’s Three Primes.

Tin is another one of the seven metals represented by two different symbols. The planetary symbol of Tin, which is also the symbol of Jupiter, the planet it is associated with is as follows: 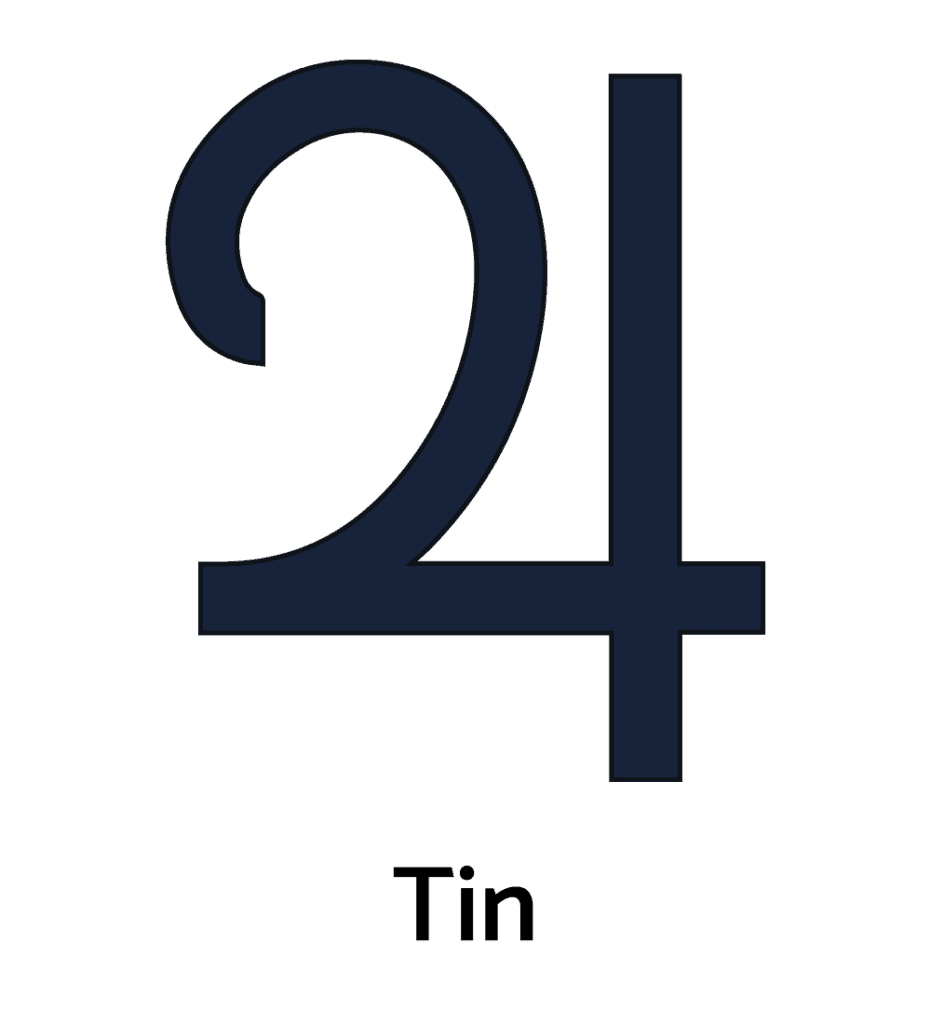 And here is the other alchemy symbol for tin: 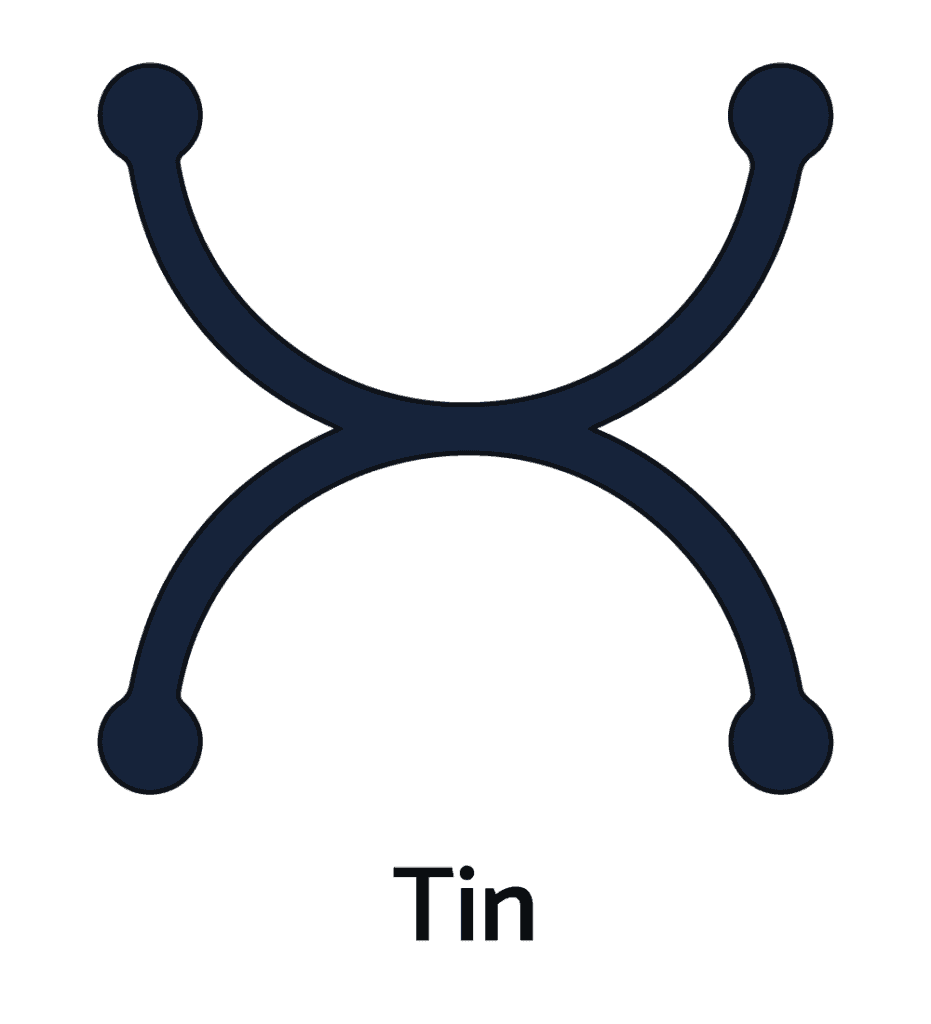 Iron is associated with the planet Mars and it is represented by two symbols in alchemy. The first and planetary alchemical symbol of iron, which is literally the same with ‘the male symbol’, is as follows: 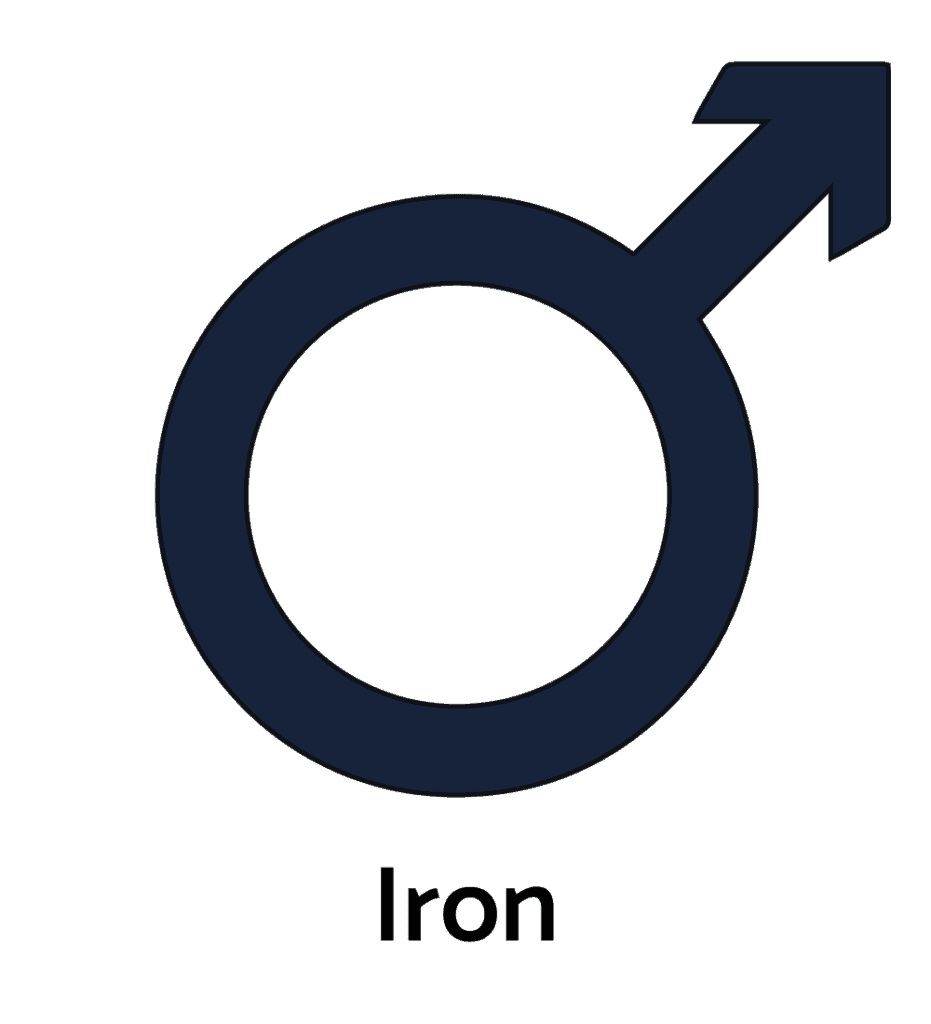 And here is the second alchemical iron symbol: 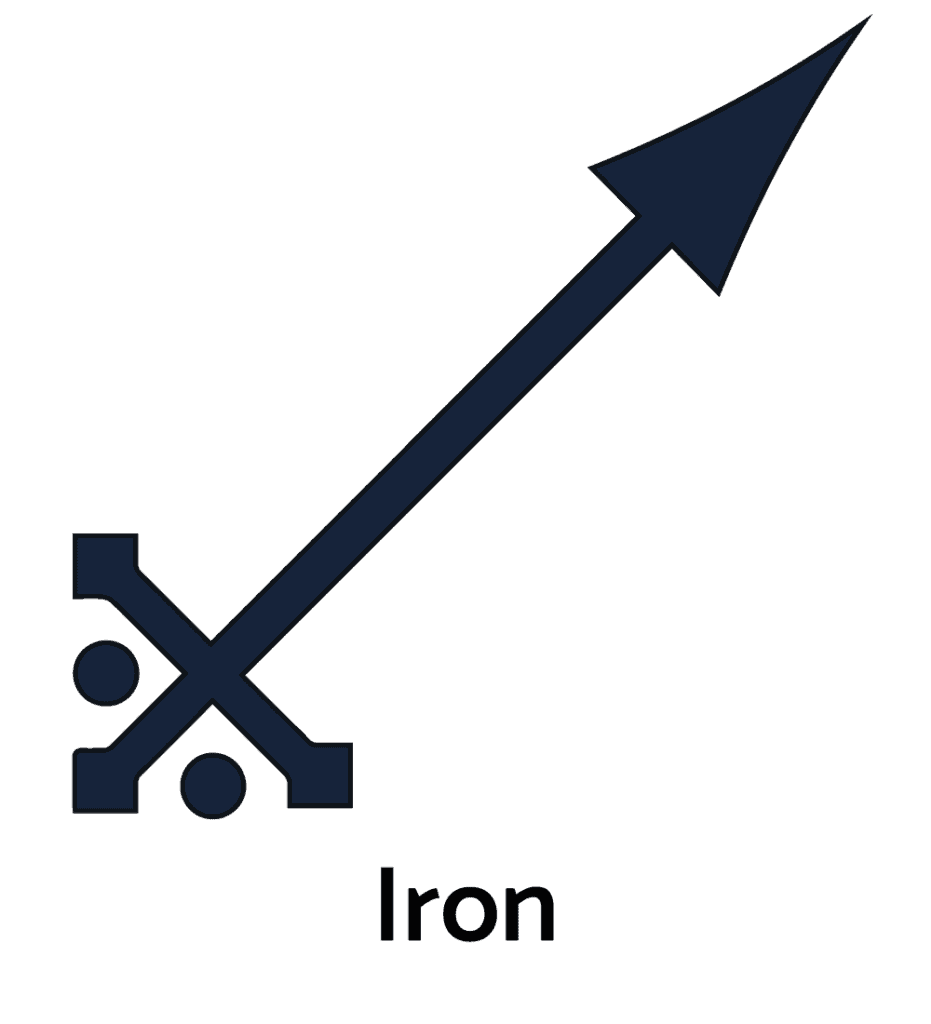 Copper is associated with the planet Venus and it has two different symbols in alchemy. The first one, that is identical with ‘the female symbol’, is also the symbol of Venus and it looks like this: 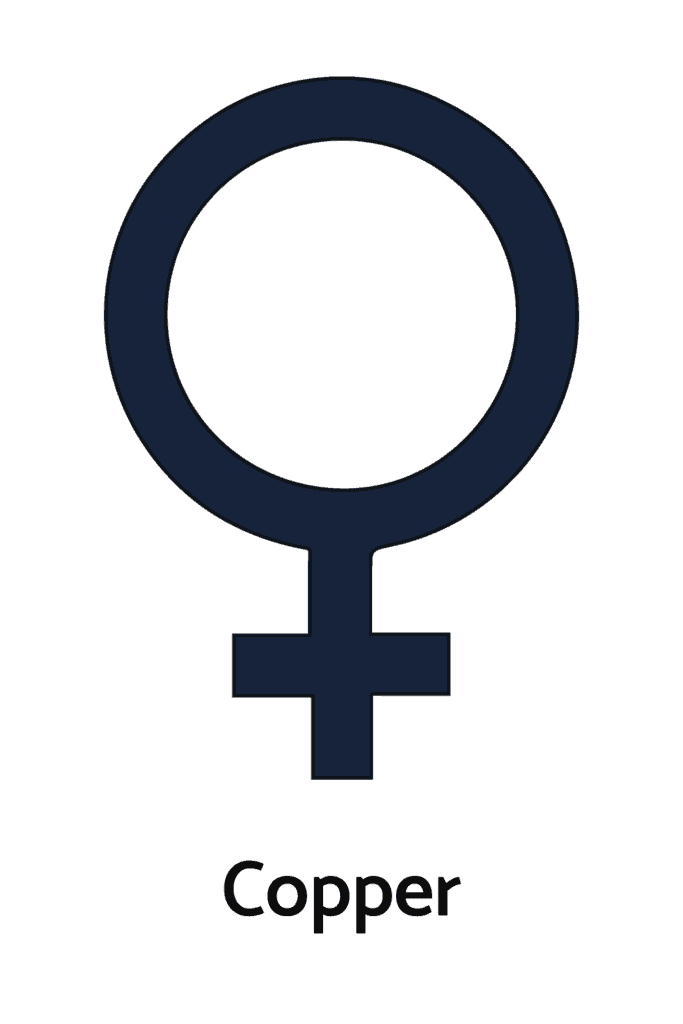 The second alchemical copper symbol is as follows: 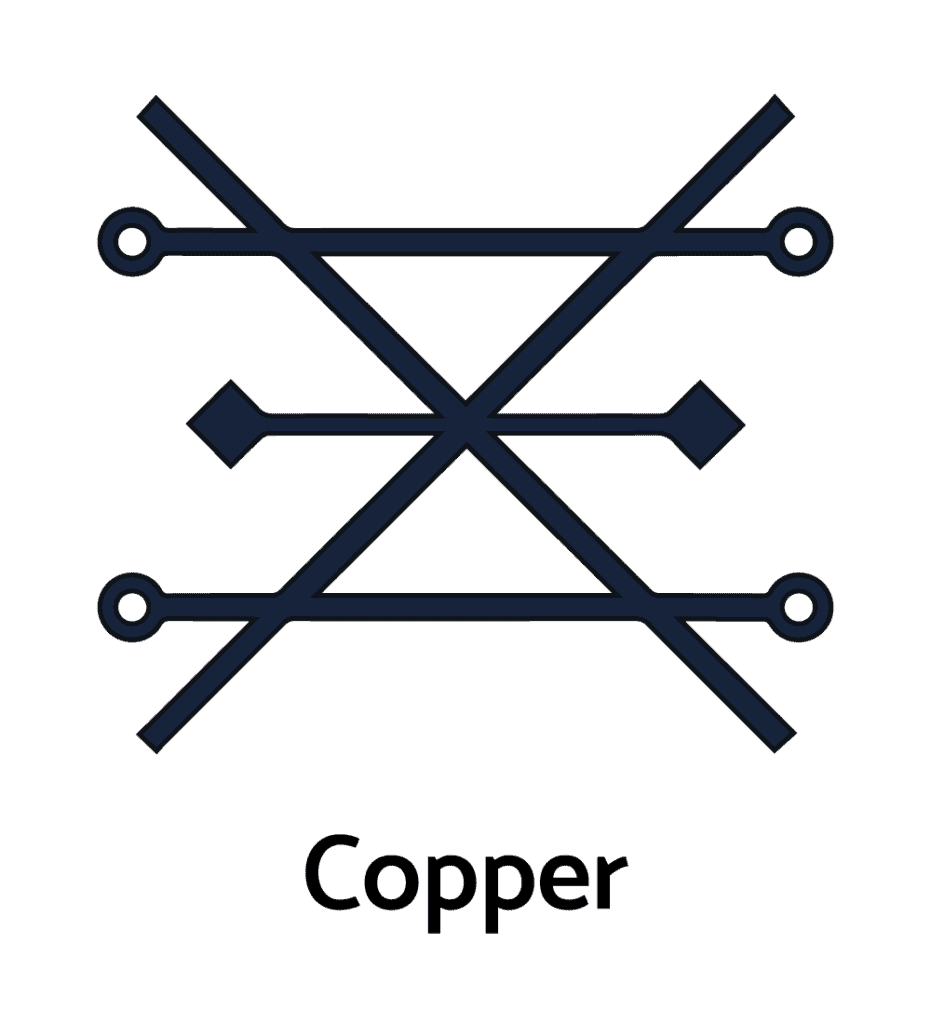 Silver is also represented with two symbols in alchemy. It is associated with the Moon (as it was considered one of the seven classical planets) and its planetary alchemy symbol is a crescent moon. 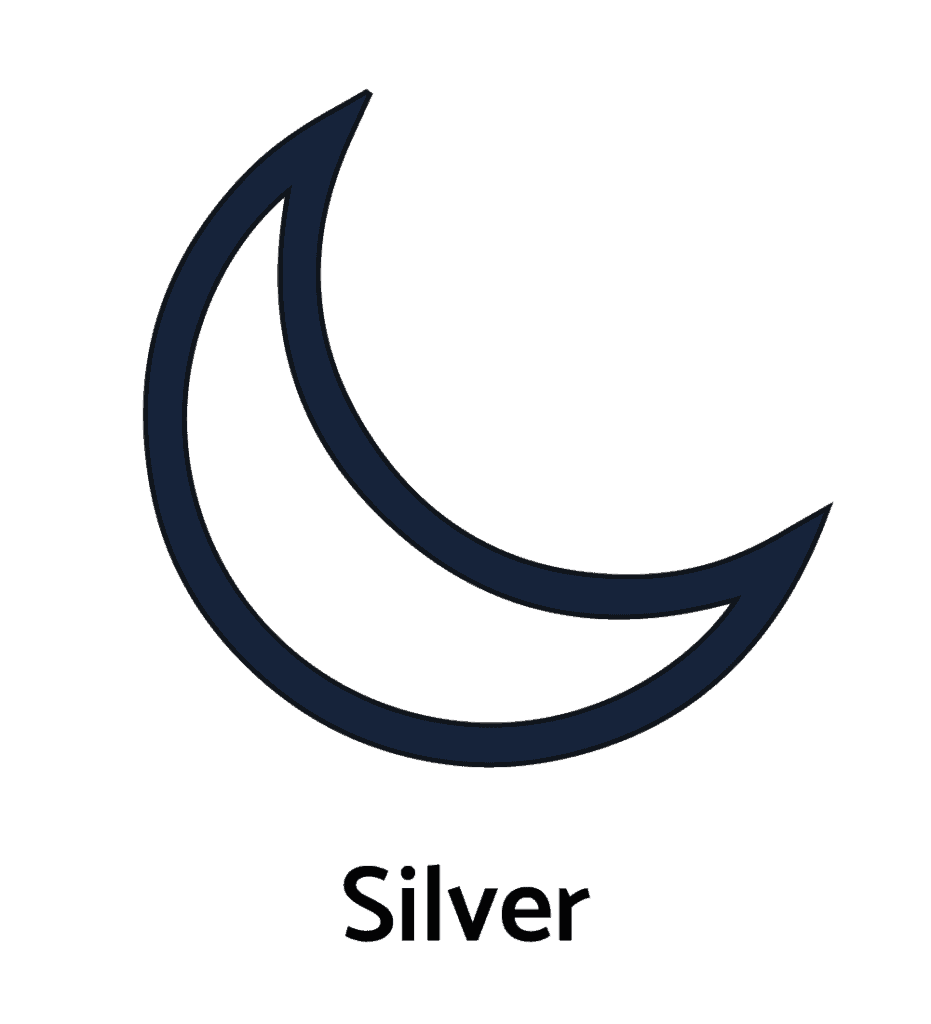 The second alchemy symbol for silver is as follows: 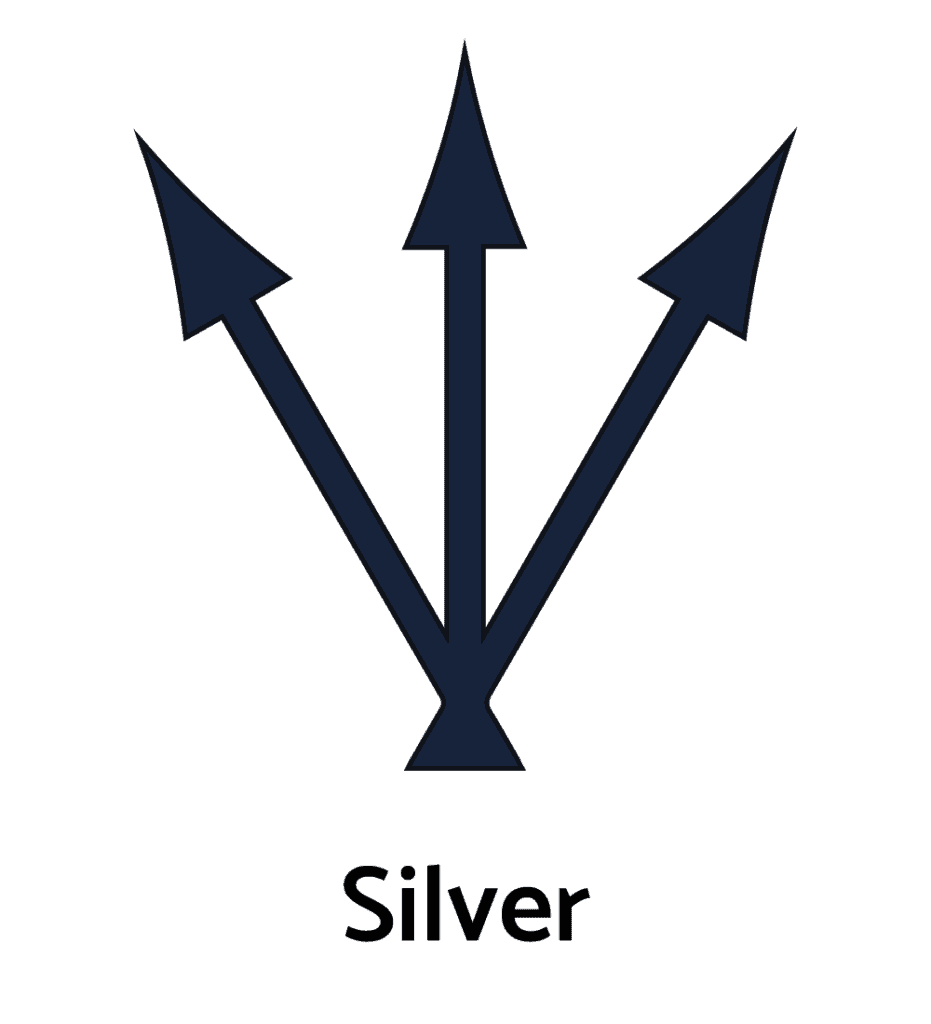 Gold also has more than one alchemical symbol representing it. The precious metal, the creation of which has been the inspiration for the magnum opus, the Great Work of alchemists for centuries, is associated with the Sun. The first alchemical symbol for gold is also the planetary symbol for the Sun: 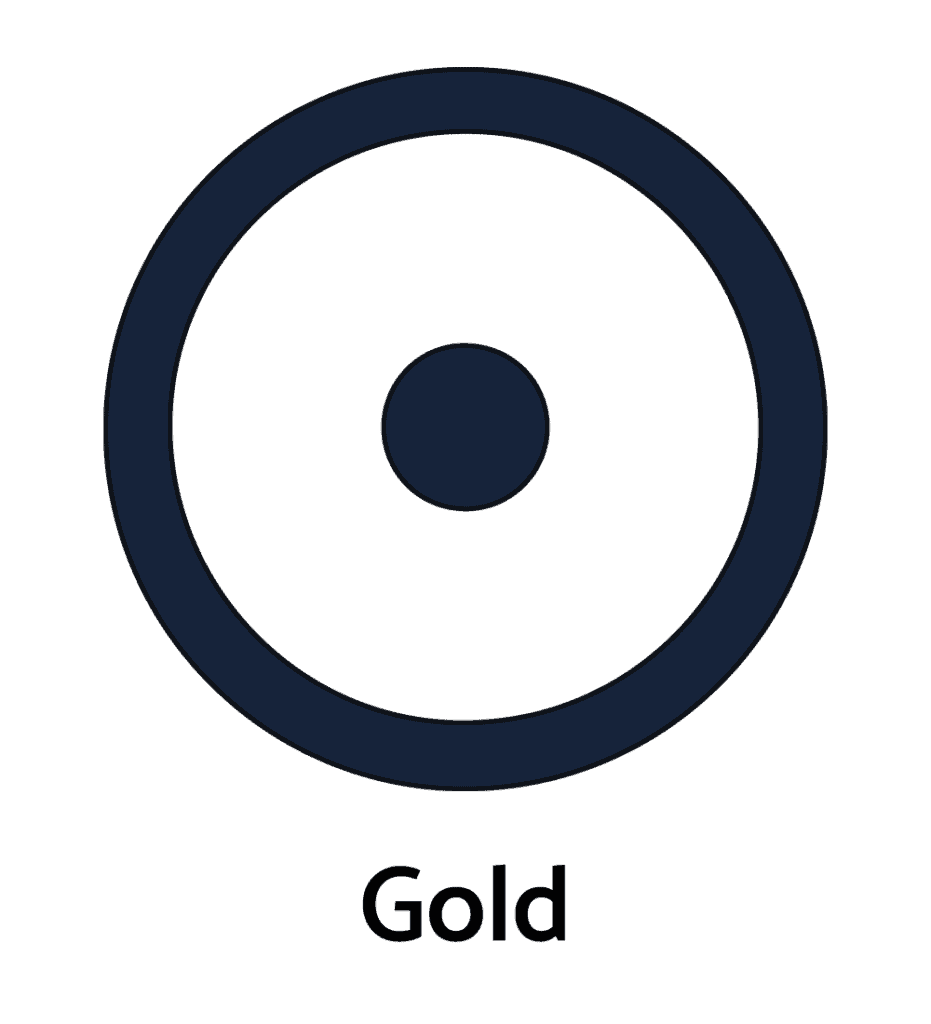 The second and third symbosl representing gold are as follows: 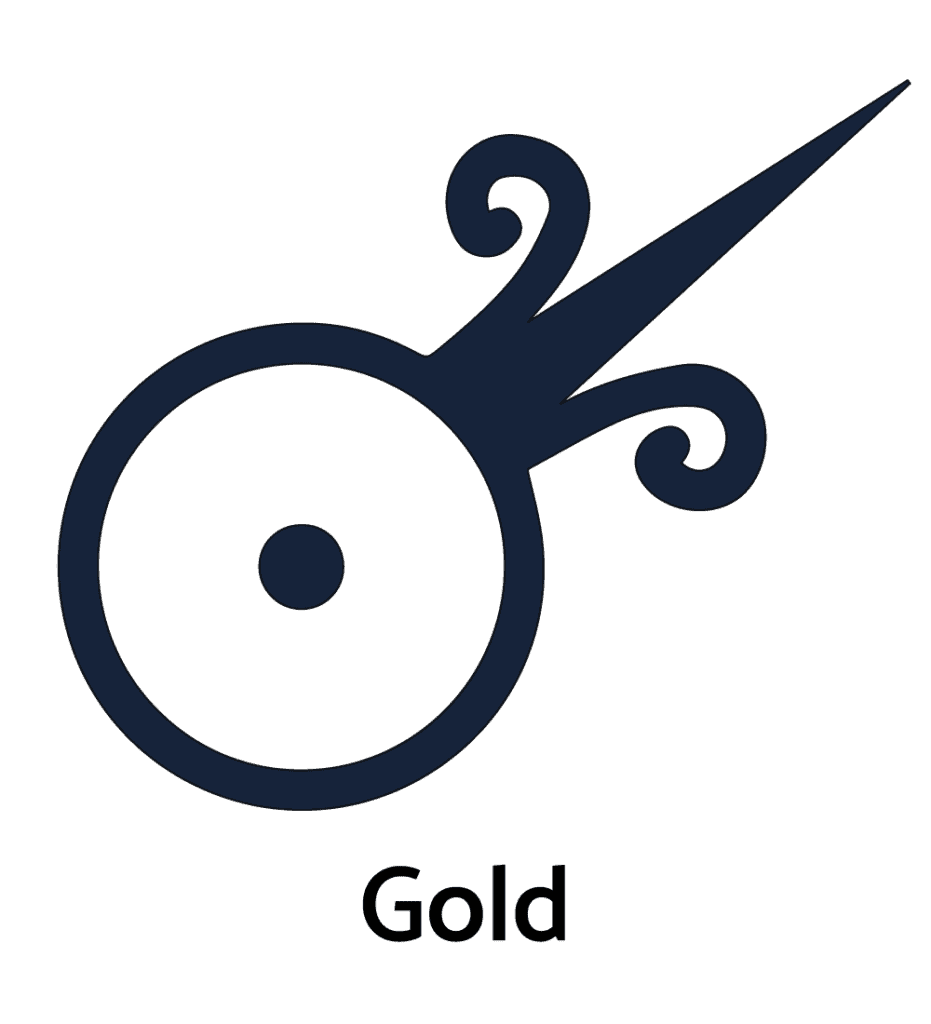 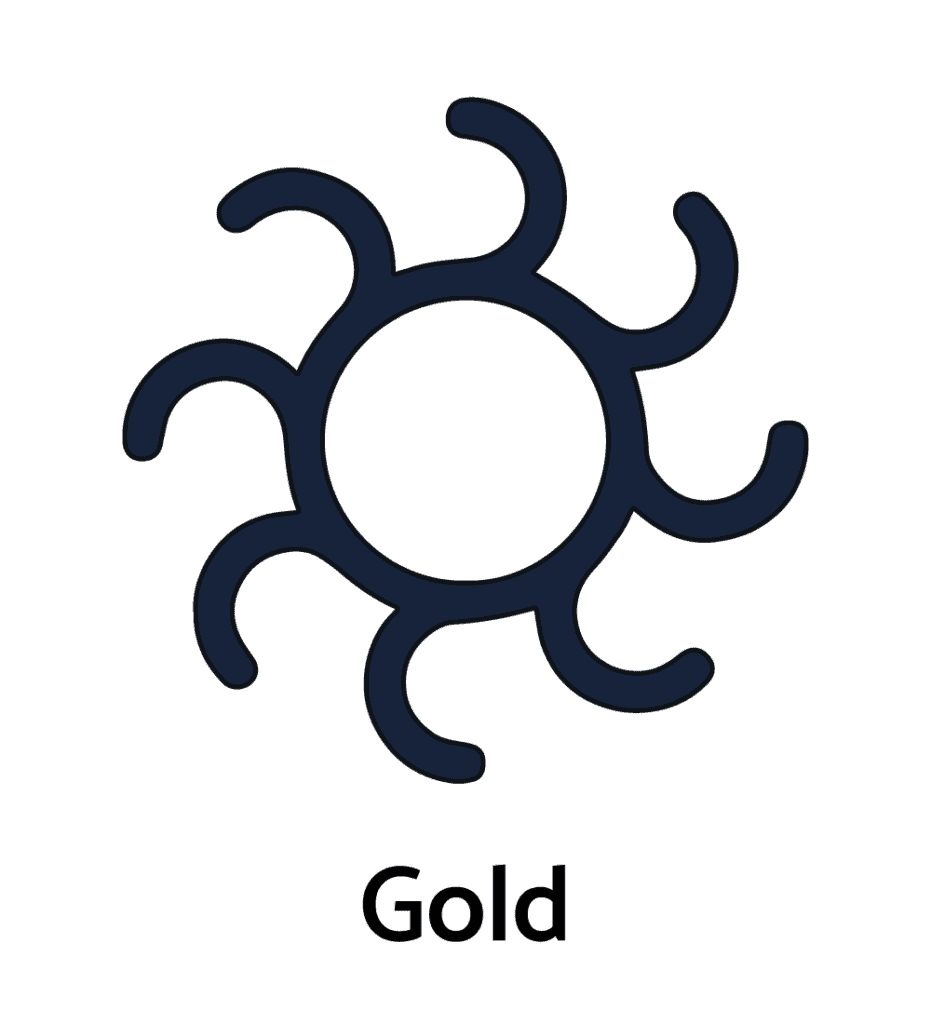 Mundane elements in alchemy are the other, ordinary elements that have also been being used in alchemy but have not been considered as significant as ‘the main’ ones we have covered so far in this post.

Sulfur, one of the Paracelsus’s Tria Prima, is one of the mundane elements in alchemy which is represented with two symbols as we mentioned above. But let us do a quick recap anyway: 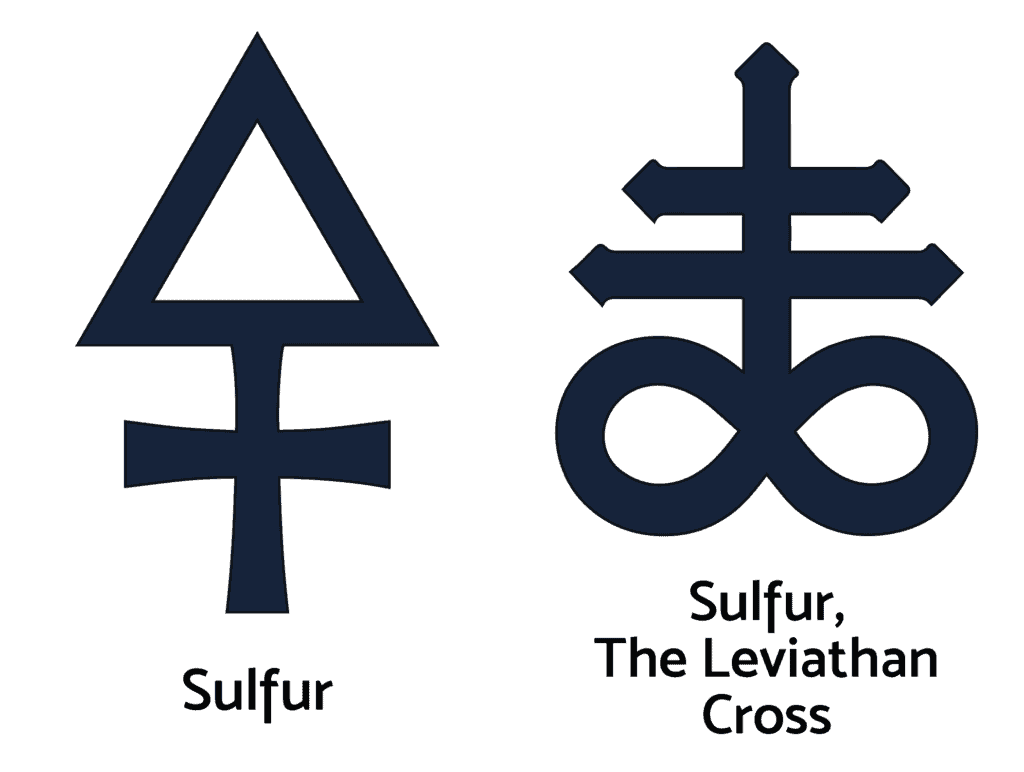 Sulfur was of significant importance for the alchemists following Paracelsus as it was believed to be one of the three primary elements that all seven metals were made of (along with mercury and salt).
It is also known as the brimstone (literally meaning ‘burning stone’) and has been used commonly by alchemists and healers throughout history.

Arsenic has several different alchemical symbols representing it, including swans (yes, we are actually talking about the birds), and the main arsenic symbol is as follows: 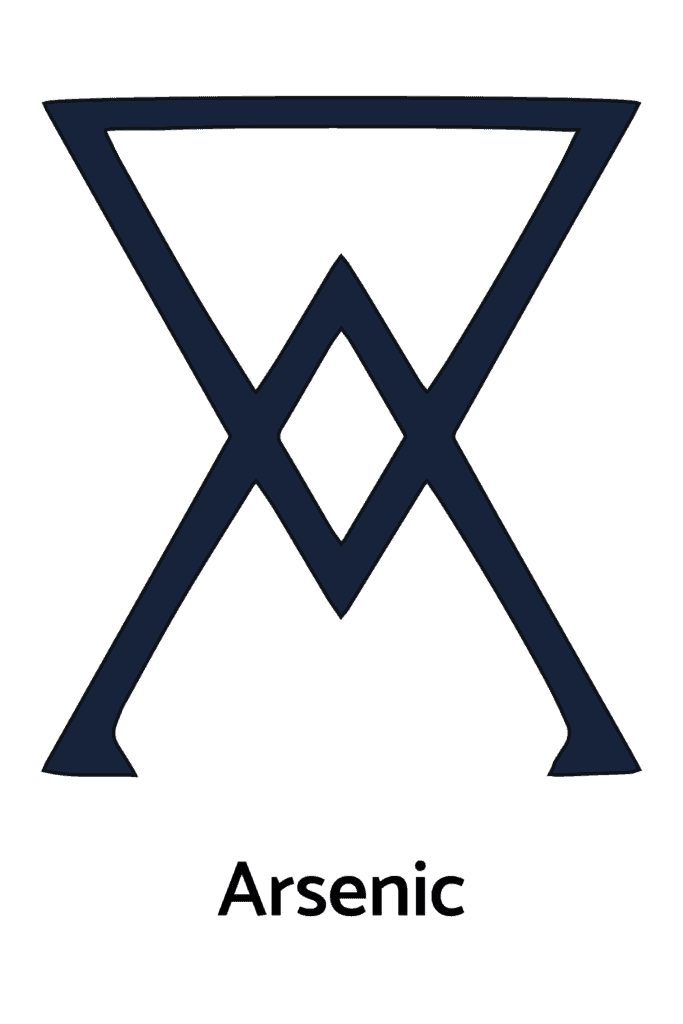 As for the reason why swans might have been used as a symbol for arsenic, although there are no accounts or no certain proof saying so, it is suggested that alchemists used swans as an arsenic symbol because of the transformative nature of the element.

Much like cygnets (the young swans) grow and turn into beautiful creatures that are swans, arsenic can transform and change into something different by appearance.

Bismuth is another one of those elements that has been used in alchemy for a long time although its specific purpose in alchemy is not very clear. It is represented with what looks like an ‘O’ letter with a semi-circle on top of it. 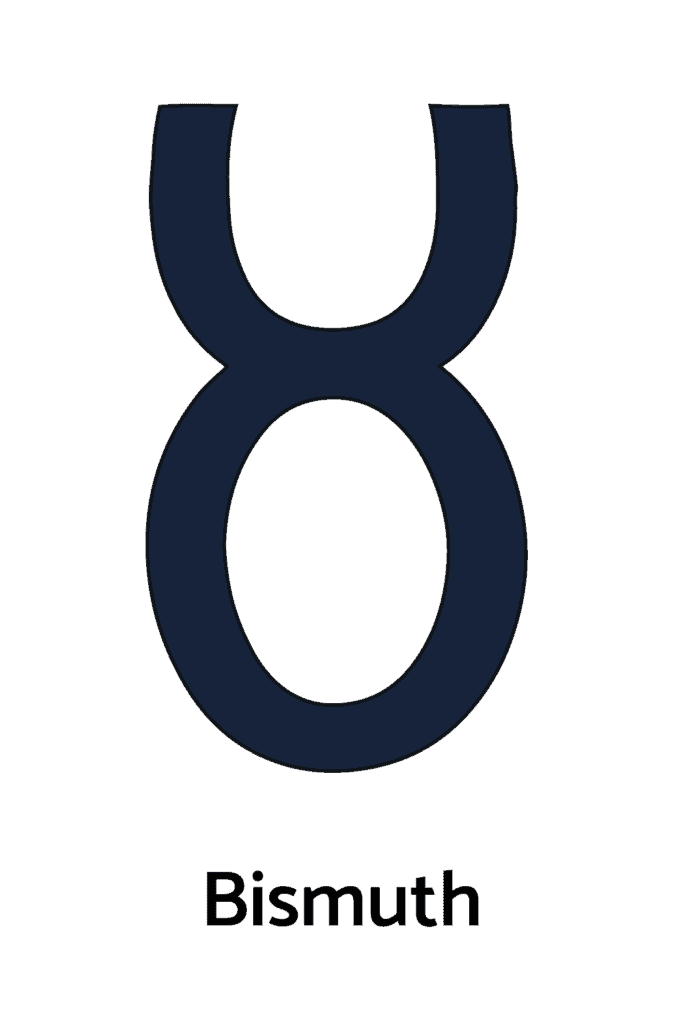 Zinc, a metal burned by alchemists to create the material called ‘the white snow’ also known as the philosopher’s wool, is represented with several symbols in alchemy. Here is the most common symbol for zinc: 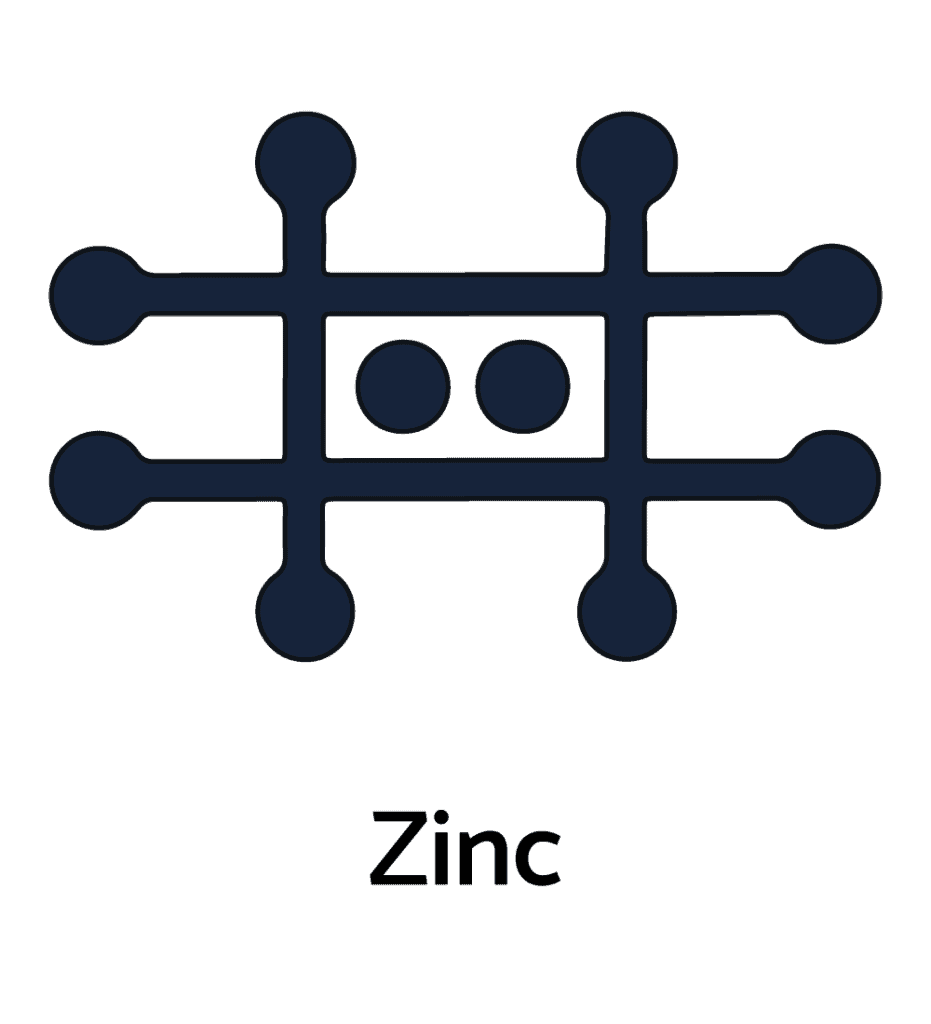 Potassium carbonate/potash was a commonly used element in alchemy and it is represented with a horizontal rectangle on top of a cross or a plus sign. 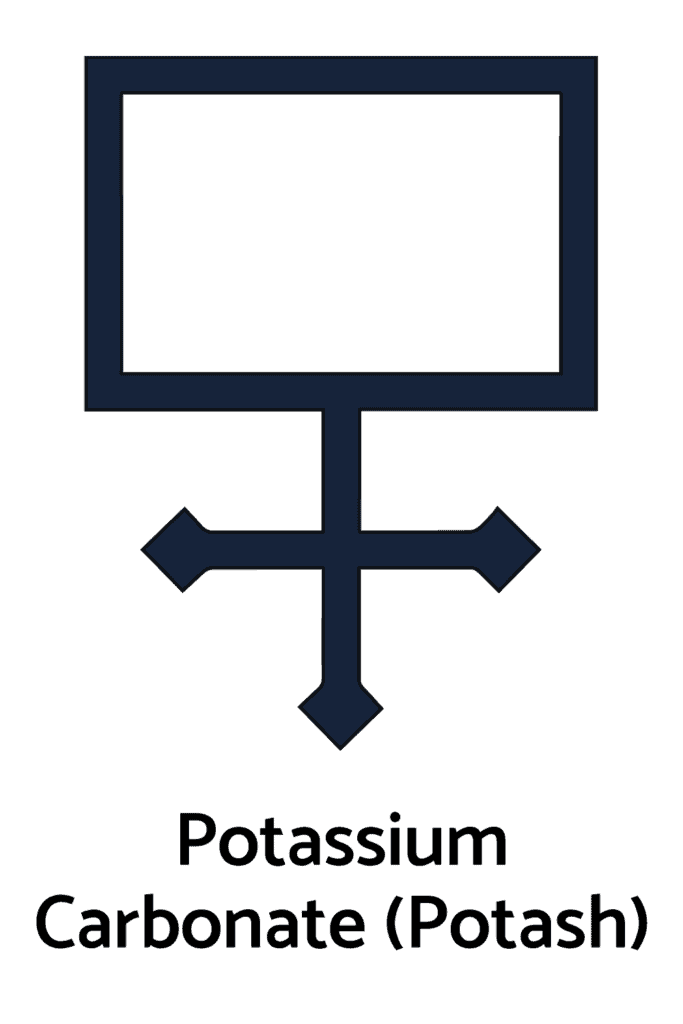 The most common alchemical symbol for the metal antimony is an inverted female symbol, that is to say, a circle with a cross on top of it. 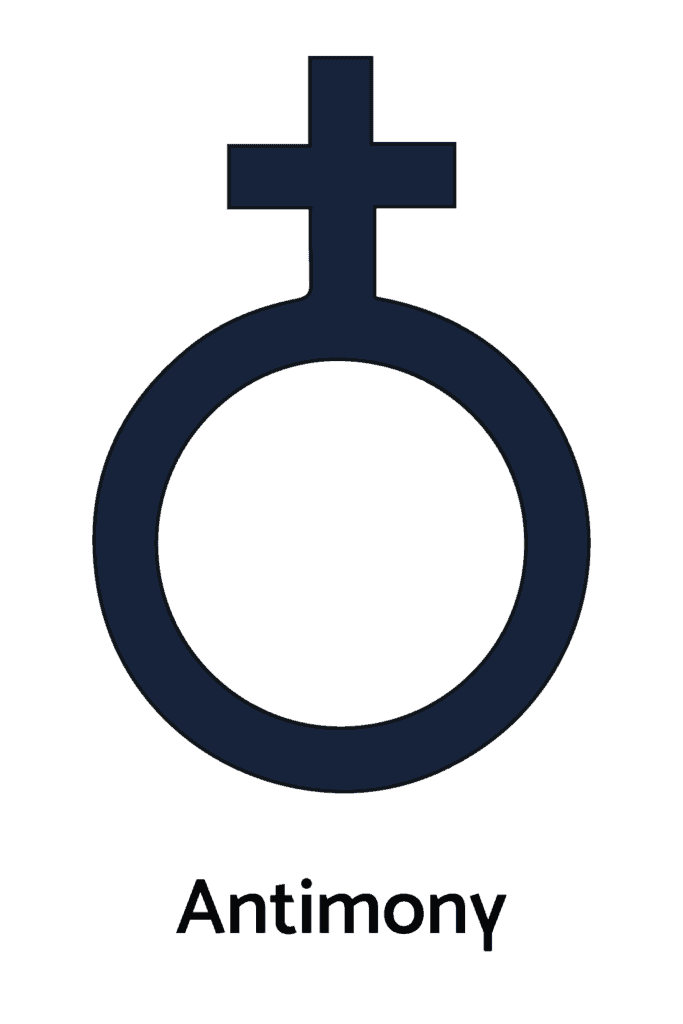 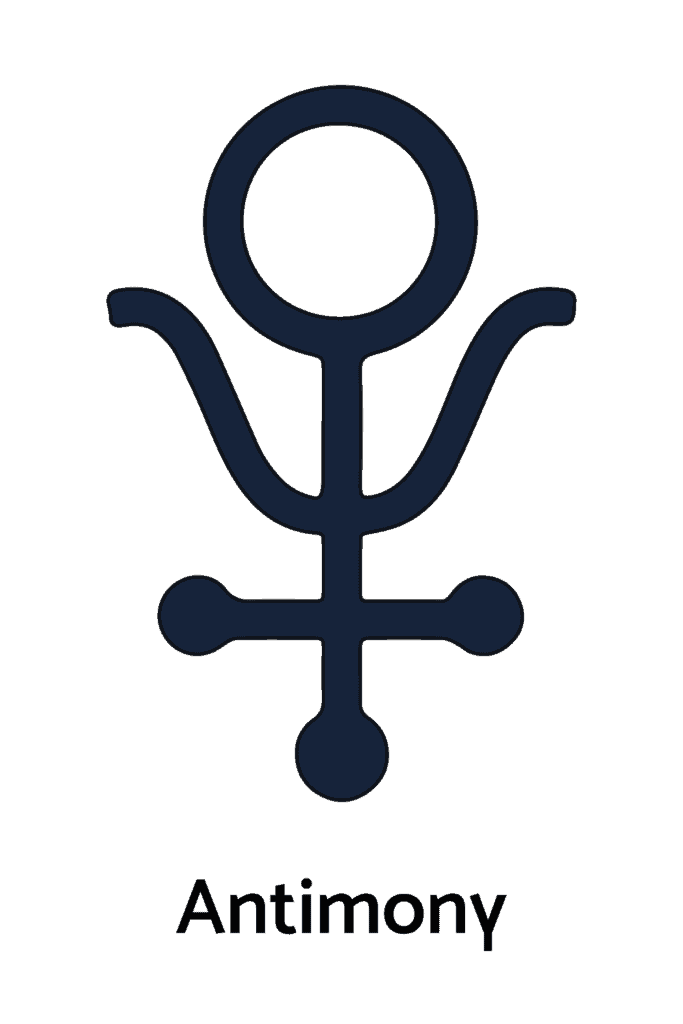 As the metal is believed to represent the free spirit of and the beast within every person, wolves have also been used to represent antimony according to some sources.

Light is a symbol of the soul for the alchemists, therefore, phosphorus, an element that can actually hold the light within and can shine in the dark, was of special interest to them.

The alchemy symbol for phosphorus is a triangle on top of a vertical line with two horizontal lines of equal length crossing through it. 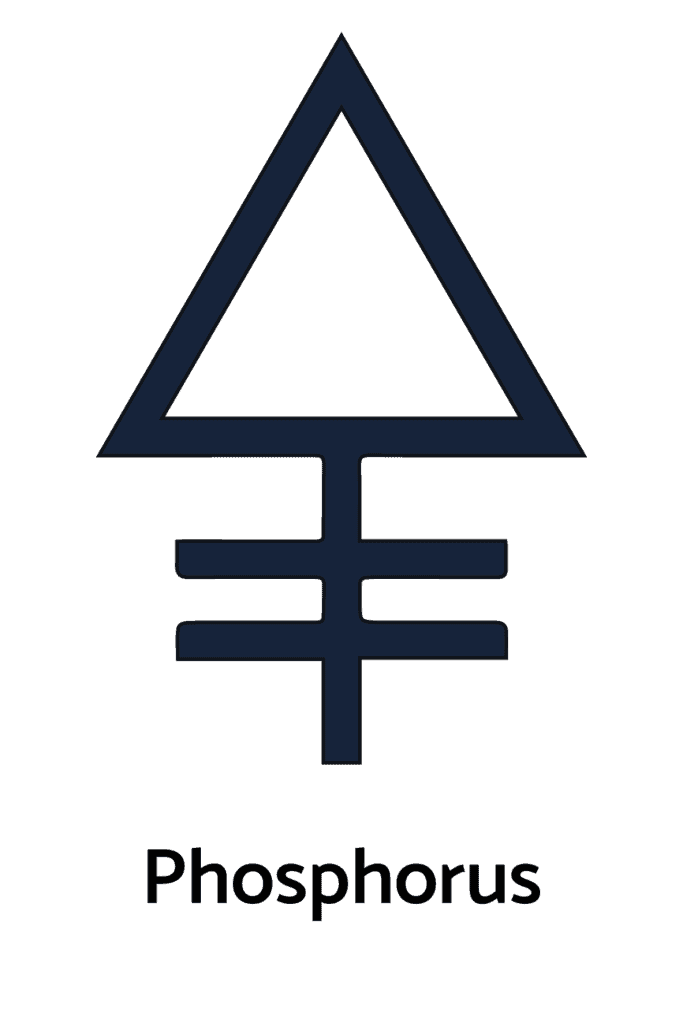 Since they believed the metal platinum was the combination of gold and silver, alchemists used the symbols for the Sun and the Moon together to create what is known as the alchemical symbol of platinum. 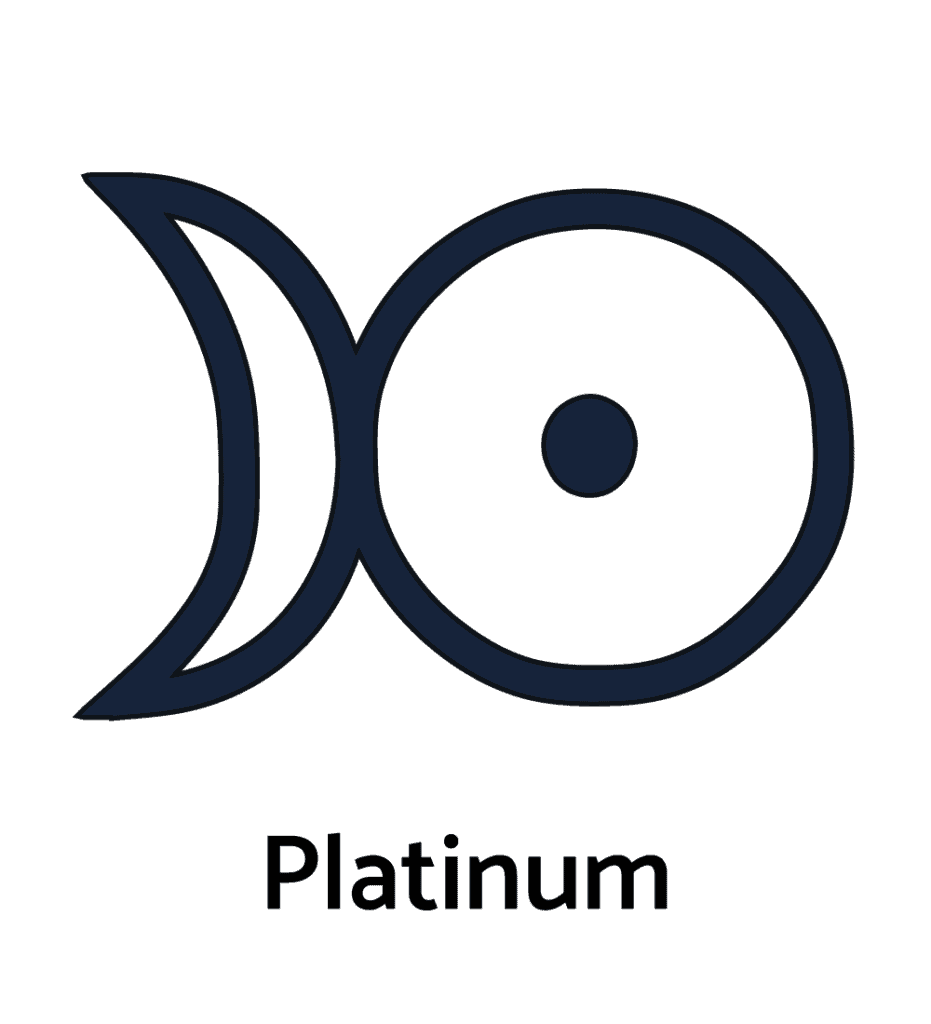 As magnesium could not be found in its pure form in nature, ‘magnesium alba’ (‘the white magnesium’), that is to say, magnesium carbonate has been used by alchemists in their efforts.

On an interesting side note, magnesium represented eternity in alchemy as it was not easy to extinguish the metal once you set it on fire.

This wraps up our detailed list of alchemy symbols. If you enjoyed the article, you might want to check out our other posts on ancient symbols here. Thanks for reading.